Complete Answer:
Pressure and temperature changes over the Arabian sea, the Indian Ocean, the Southern part of Pacific Ocean, and the Bay of Bengal plays an important role in monsoon rains over India. The major impact is contributed by the Thar Desert and the Himalayas.
The western disturbances cause off-monsoon rainfall which occurs from mid-October.
The Desert and Semi-desert regions of India receive less than 20 cm of annual rainfall. States of Rajasthan, Gujarat, and adjacent semi-desert areas are included under this category.
The regions that experience precipitation more that 200 cm are called Extreme precipitation regions. The Northeast regions and the windward side of Western Ghats are included in this category.
Mawsynram is a village situated in East Khasi Hills of Meghalaya. It is the region with the highest precipitation. India’s and World’s highest rainfall is recorded here. Chrrapunji is also a village located in East Khasi Hills of Meghalaya. It is referred to as the wettest place on Earth.
Barmer district located in Rajasthan forms a part of Thar Desert. It is one of the scanty rainfall regions.
Various regions of India experience different climatic conditions based on different geographical terms. Some of the regions get very high rainfall and others get very low rainfall. The precipitation in India is very irregular. The average rainfall in India is around 118 cm as per the annual data of Meteorological Department. 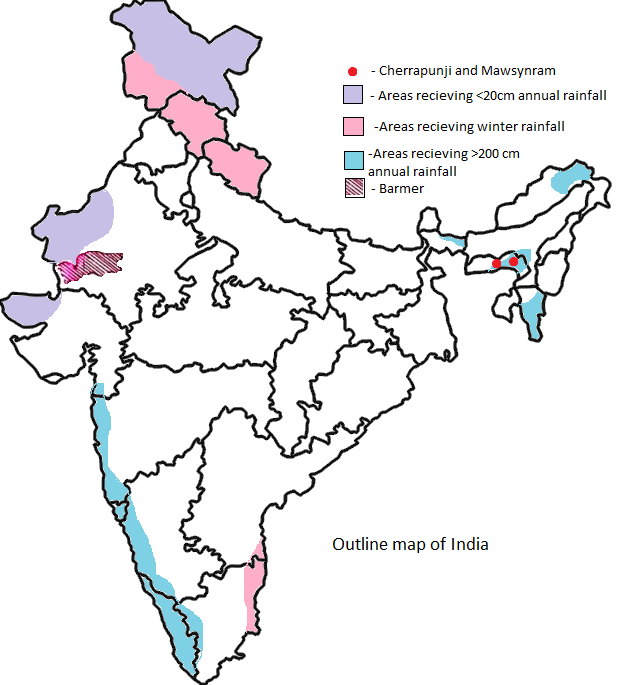