Complete step-by-step answer:
We can draw a diagram as per the given information as 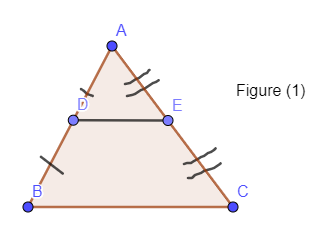 Hence, we can write equations from $\Delta ABC$as

Hence $\Delta ABC$and $\Delta ADE$are similar to each other by SSS criteria. Now, property of similar triangles related with area and sides of triangles can be given as

Hence, if $\Delta ABC$and $\Delta ADE$are similar then, we have

Squaring of each term in above equation, we get

Note: Another approach for proving$\Delta ABC$and $\Delta ADE$similar is by mid-point theorem DE||BC.
Hence,
$\angle ADE=\angle ABC$ (Alternate angles)
$\angle AED=\angle ACB$ (Alternate angles)
$\angle A=\angle A$ (Common)
Hence, by AAA criteria $\Delta ABC$ is similar to $\Delta ADE$. Now apply the same approach for getting area
($\Delta ADE$).
One can go wrong while using the property of similar triangles related with area and sides. He/she may apply as the ratio of area of triangles should be equal to ratio of sides which is wrong. Ratio of sides is equal to ratio of squares of corresponding sides. Hence, be clear with this property and with midpoint property as well.
Using the mid-point theorem in solution is the key point of the question.
×
Sorry!, This page is not available for now to bookmark.
Bookmark added to your notes.
View Notes
×

Benefits and Limitation of E-Business

Differences Between Traditional Commerce and E-commerce

Altitude and Median of a Triangle

Medians and Altitudes of a Triangle

The D- and F- Block Elements