In a right-angled triangle ABC which has right angle at B. A circle is drawn with AB as diameter intersecting the hypotenuse at P. Prove that the tangent to the circle at P bisects BC.

Verified
129k+ views
Hint: We first draw the information given for us. We can see that side BC is tangent to the circle from a point where tangent P is also passing. We use the fact that angles opposite to equal sides are also equal, sum of angles in a straight line is $ {{180}^{o}} $ to prove the required result.

Complete step-by-step answer:
Given that we have a right-angled triangle ABC whose right angle is at vertex B and we have a circle drawn with AB as diameter intersecting the hypotenuse at P and a tangent is drawn to circle at point P. We need to prove that this tangent bisects the side BC.
Let us draw a figure so that all the information can be viewed better. We assume the tangent of circle at point P intersects side BC at point ‘F’. According to the problem we need to prove BF=FC. 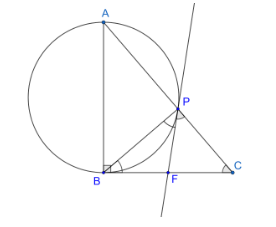