If two intersecting chords of the circle make an equal angle with the diameter passing through their point of contact to the diameter, prove that the chords are equal.

Verified
149.4k+ views
Hint: The chords can be proved if equal if their distance from the center is equal, which can be done by using congruency.

Complete step by step answer:
The figure according to the condition given in the question is shown below as, 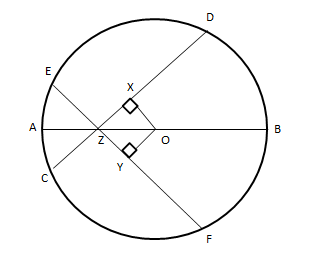 Given: Let’s suppose CD and EF are the two chords of a circle intersecting at Z. AB is the diameter which passes through their point of intersection as well. The chords are equally inclined to the diameter. It implies that$\angle XZO = \angle YZO$.
To prove: the length of the chord CD and EF are equal.

Proof:Construction: Drop two perpendiculars from center O to the chord CD and EF respectively, such that they intersect the chords at X and Y respectively.
In triangle OXZ and triangle OYZ
$\angle OXZ = \angle OYZ$ (Both are equal to ${90^o}$, as per our construction)
$\angle XZO = \angle YZO$ (Chords are equally inclined with the diameter)
$OZ = OZ$ (Both are common in the two triangles.)
Hence, $\Delta OXZ \cong \Delta OYZ$ by AAS(Angle-Angle-Side) criteria
Thus, it can be concluded that
$OX = OY$ (By CPCT- Corresponding Parts of Congruent Triangle)
Since the chords are equidistant from the center of the circle, therefore they are equal to each other.
Thus, the length of chord CD = length of chord EF.
(Proved)