Moving Charges and Magnetism for NEET

The chapter moving charges and magnetism begins with the magnetic force acting on a charged particle moving in a magnetic field. Cyclotron which is a practical application of lorentz force is discussed in this chapter in detail. Biot-Savart law and Ampere’s law are very important concepts in this chapter.

We also learn about the formula of magnetic effect of electric current and magnetic field produced due to a solenoid and toroid. Force acting on a current-carrying conductor placed in a  magnetic field and the force acting between two parallel straight conductors are also discussed in this chapter.

1. Two long parallel wires carrying equal current separated by 1 m, exert a force of 2✕10-7 N/m on one another. The current flowing through them is

Let the Current passing through each wire be I

The formula to calculate the force exerted by wires on one another is given by,

Therefore, the total current flowing through them is 1 A.

Key Point: Force acting between two parallel current-carrying wires depend on the current passing through the wries and distance between them.

2. An alpha particle and proton travel with same velocity in a magnetic field perpendicular to the direction of their velocities, find the ratio of the radii of their circular path.

The radius of the circular path of the alpha particle is given by,

Divide equation (1) by equation (2) to obtain the ratio of radii of their circular path.

Therefore, the ratio of the radii of thor circular path is 1:2

Key Point: Alpha particle is a He2+ nucleus and has mass four times the mass of a proton and charge equal to double the charge of proton

The magnetic moment of the rectangular coil is calculated by the formula given below,

Work done in rotating the rectangular coil can be calculated as follows,

Trick: Magnetic moment of rectangular coil is equal to the product of number of turns, area of the coil and the current passing through the coil.

2. An infinitely long straight conductor carries a current of 5 A as shown. An electron is moving with a speed of 105 m/s parallel to the conductor. The perpendicular distance between the electron and the conductor is 20 cm at an instant. Calculate the magnitude of the force experienced by the electron at that instant. (NEET 2021) 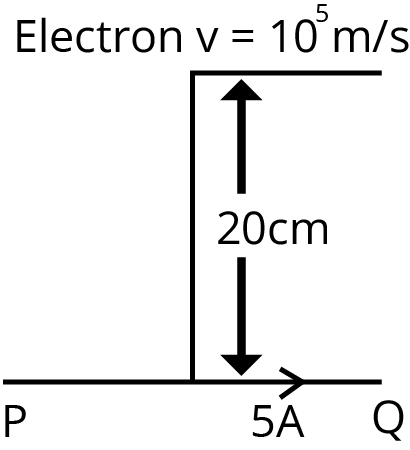 The magnetic field due to current carrying infinitely long straight conductor is given by,

The force acting on the electron is given by

The correct answer is option (d).

Trick: The motion of a charged particle and the magnetic field produced by the infinitely long conducting wire is perpendicular to each other.

2. An electron is moving in a circular orbit of radius r makes n rotations per second. The magnetic field produced at the centre has magnitude_____ (Ans: μ0ne/2r)

In this article we have provided important information regarding the chapter moving charges and magnetism such as important concepts, formulae, etc.. Students should work on more solved examples along with  previous year question papers for scoring good grades in the NEET exam.

1. How many questions are asked from magnetism in NEET?

2. Is moving charges and magnetism important for NEET?

3. What is the magnetic dipole moment of a current loop?

The magnetic dipole moment is a vector and its magnitude is equal to the product of area of the loop and current passing through it.