Cell - The Unit of Life

Cell - The Unit of Life is a very important part of the NEET syllabus and this article will help you to get the insights and also one can refer to this for last-minute revision purposes. This chapter is an important component in Unit Structure and Function because it is the source of 2-3 questions per year. The chapter is entirely theoretical and requires thorough revision.

So, in this article, you’ll be studying about the cell, its discovery, the scientists involved, the kinds of cell, cell membrane, cell wall, and other major components of the cell. This synopsis of the chapter would be highly helpful to the student in order to gain the maximum marks.

Important topics of Cell - The Unit of Life

Plants and animals have cells that are substantially different. The lack of cell walls in animal cells is among the most significant differences that exist. The egg or female ovum is the largest cell in the human body and is around 1 mm across. However, the granule cell, which is present in the human cerebellum and measures around 4.5 micrometres in diameter, is the smallest cell. 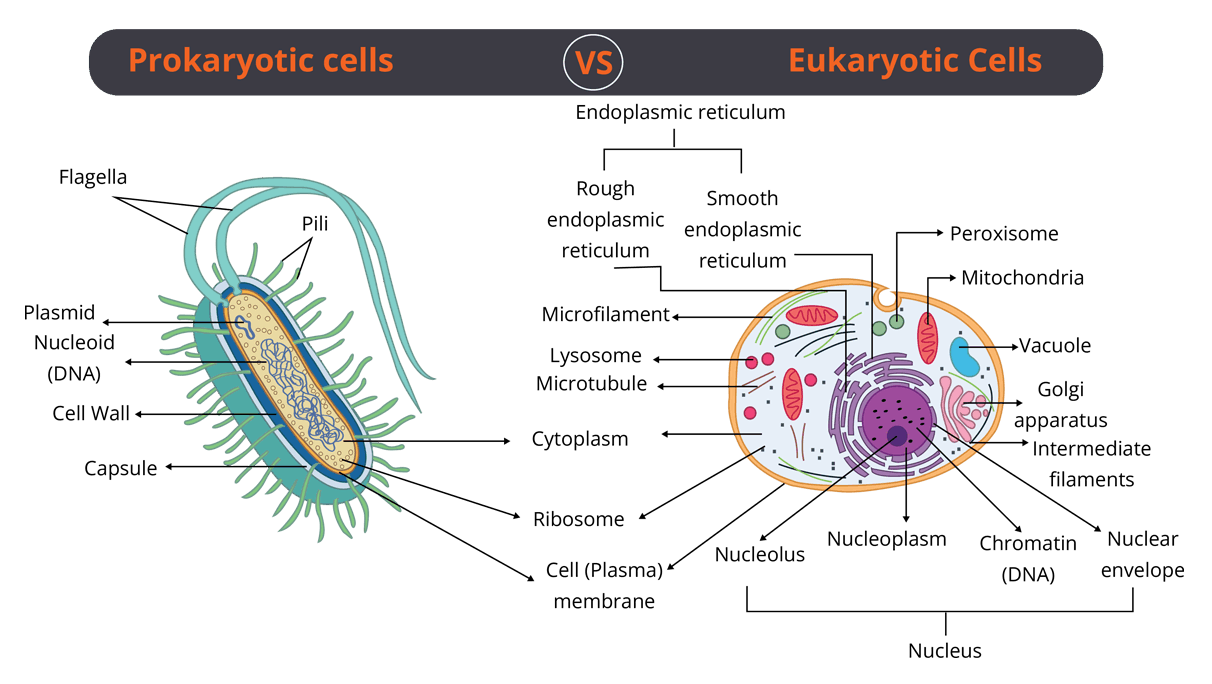 At the bottom of the article, students can find the difference and similarities between the two kinds of cells.

Differences Between Prokaryotic and Eukaryotic Cell

1. The cell wall of algae is made up of which substance?

(d) all of the above

Cristae: The inner membrane of mitochondria folds inward to form cristae, a finger-like projection. It expands the absorption surface area.

Cisternae: A space between the membranes of flattened sacs of the Golgi apparatus and the endoplasmic reticulum, as well as between the two membranes of the nuclear envelope that contains fluid.

Thylakoids: Thylakoids are disc-shaped structures that are stacked to form grana. These include photosynthetic pigments and serve as a location for photosynthesis light reactions.

Ans: Mitochondria and chloroplasts are the two organelles that are double-membrane bound.

4. Which of the following is not correct?

(a) Robert Brown discovered the cell.

(b) Schleiden and Schwann formulated the cell theory.

(c) Virchow explained that cells are formed from pre-existing cells.

(d) A unicellular organism carries out its life activities within a single cell.

Ans: Robert Brown discovered the cell. - It is a false statement.

The first person to see a cell was Robert Hook. He used a very primitive microscope and observed empty blocks like structure in the cork cells which were named as cells.

Solved Problems of Previous Year Question From the Chapter

1. When the Centromere is situated in the middle of two equal arms of chromosomes, the chromosome is referred to as:

The chromosome is called Metacentric when the centromere lies in the centre of two equal arms of chromosomes.

Sub-metacentric chromosomes have the centromere located somewhat distant from the middle of the chromosome.

Acrocentric chromosomes are those in which the centromere is located relatively close to one end of the chromosome.

When the centromere is located at the end of the chromosome, it is referred to as telocentric.

Key point to remember: With a diameter of 0.1 micrometres, PPLO is also known as mycoplasma. It's the tiniest cell ever found.

3. The Golgi complex participates in

The Golgi complex is a membrane-bound organelle found solely in eukaryotic cells. It has a role in secretory vesicle production.

4. The shorter and longer arms of submetacentric chromosomes are referred to as:

Key Point to Remember: Human chromosomes have 2 arms - the p (short) arm and the q (long) arm, and both are separated by the centromere.

1. Which of the following is not true of a eukaryotic cell?

Ans: a. Cell wall is made up of peptidoglycans.

Option a is incorrect as the cell wall is made up of cellulose in eukaryotic cells. The other options are true for eukaryotes, that is, mitochondria do carry circular DNA, the organelles present are membrane bound, which includes Golgi apparatus, chloroplasts etc., and the type of ribosome present in the cytoplasm is 80S.

Point to Remember: The cell wall of prokaryotic cells is made up of peptidoglycan.

2. The organelle common among prokaryotic and eukaryotic cells is

The nucleus, endoplasmic reticulum, and mitochondria are membrane-bound organelles in eukaryotic cells; however, the ribosome is the only organelle that can be seen in both prokaryotic and eukaryotic cells.

Point to Remember: Eukaryotic ribosomes are much larger than Prokaryotic ones.

3. Identify the cell organelles labelled as A, B, C, and D. Mark the correct option w.r.t. organelle and its function. The correct labelling of the diagram has been given below.

So, the main arena of cellular respiration is Cytoplasm.

The article has given crisp and concise content as per the Cell - The Unit of Life NEET notes. The questions added at the end are highly important from the exam point of view and thus the student can have a clearer understanding of the type of questions that might appear in the exam.

FAQs on NEET Important Chapter: Cell - The Unit of Life

1. What are the major areas of the chapter that need to be learned on tips?

The student should remember the names of all the scientists involved, cell organelles and their respective functions, and the major theories as discussed in the chapter.

2. What is the percentage weightage of chapter Cell - The Unit of Life in NEET?

The unit Cell: Structure and Function completely carries the 9% of weightage in NEET. This unit further carries 3 chapters, namely, Cell: the unit of life, Biomolecules, and Cell Cycle and Cell Division.

3. Is Biology difficult in NEET?

According to NEET research from past years, the exam is somewhat difficult. It has been observed that Physics stands as the most difficult section, while Biology was rated as the simplest.