This article is created by keeping NEET aspirants in mind. It contains notes and important questions from the chapter Biological Classification. This article will be served for last-minute quick revision notes as well as for clarifying concepts in short related to the chapter.

It covers all the important concepts such as the characteristic features of living beings, the basic unit of biological classification, rules of binomial nomenclature, and the difference between taxonomy and systematics. Biological classification notes include all the concepts in short and crisp language. Along with this, it contains generic FAQs regarding the NEET Exam.

Important Topics of The Living World

In this system, the classification of organisms is based on their evolutionary relationships.

Drawbacks of Two Kingdoms of Classification

Drawbacks of Three Kingdom of Classification

Drawbacks of Four Kingdoms of Classification 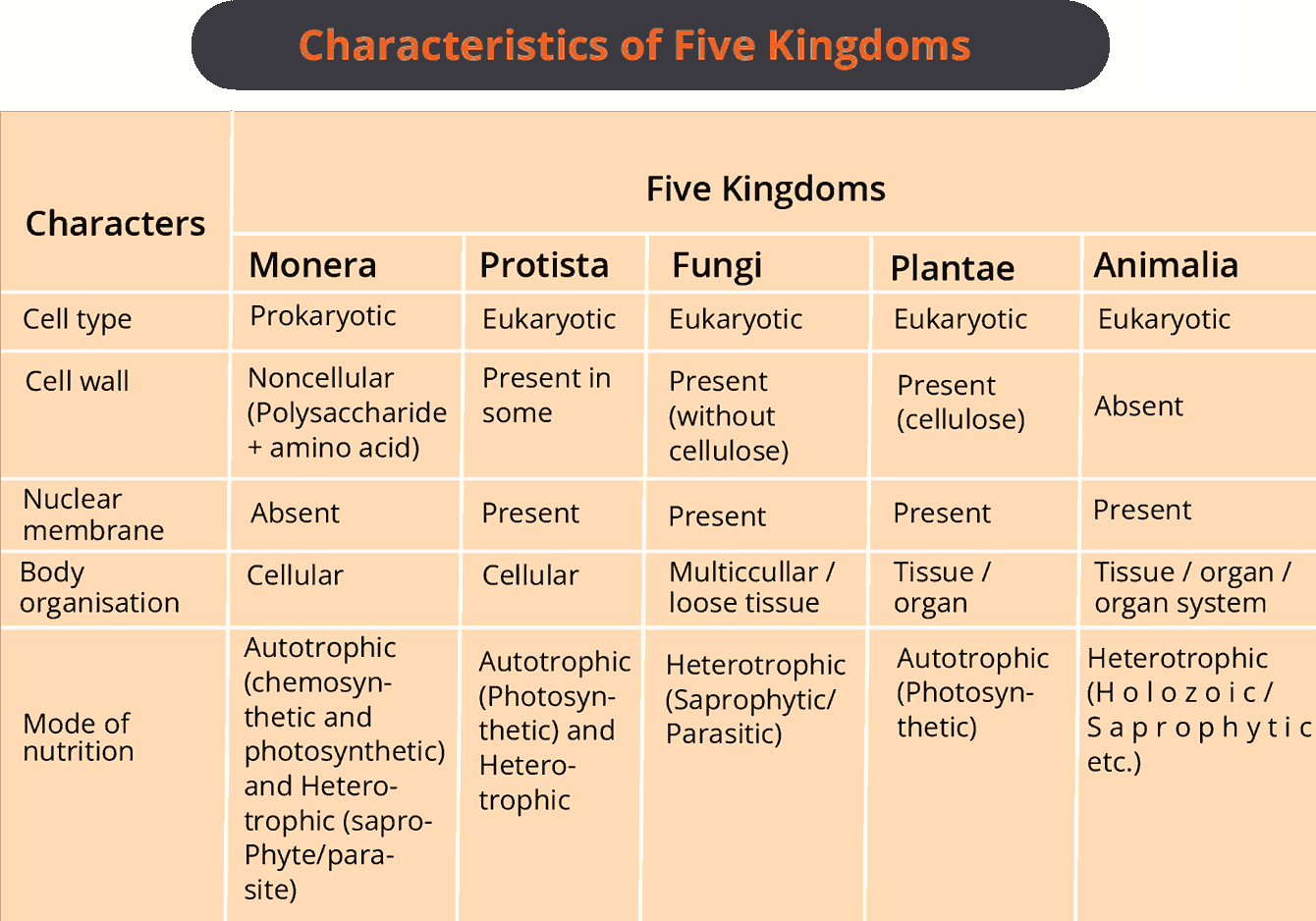 Difference between Monera and Protista

Difference Between Virus and Viroid

2. What are the properties of diatom cell walls?

Ans: Cell walls in diatoms are encrusted with silica, which creates distinct patterns on the walls. These diatoms leave a lot of cell wall deposits in their habitat, which eventually turns into diatomaceous earth.

1. Which of the following statements is correct?

Ans: (d) The fusion of protoplasms between two motile or non-motile gametes is known as plasmogamy.

2. Which of the following statements is incorrect?

Ans: (a) The Infective constituent in viruses is the protein coat.

Viruses are nucleoprotein entities that can use the synthesis machinery of another organism's live-cell for multiplication rather than growth and division.

Trick to remember: Virus body is made up of Nucleic acid + Protein = Nucleoprotein.

1. Which system of classification was given by Bentham and Hooker?

It is a classifying method that considers a comparative examination of a number of traits in order to describe natural similarities and differences, and thus natural connections, among species.

2. Archaea and Nitrogen-fixing organisms are classified among which of the following kingdoms?

This article covers all of the major concepts such as the need for biological classification, natural and artificial systems of classification, viruses, viroids, prions, etc. and also provides clear explanations which make it ideal for quick and successful revision. It covers key ideas, concepts given in Biology NCERT and problems from previous year's NEET question papers, as well as NEET practice tests which makes it excellent for the last time revision.

1. Is the chapter on biological classification important for NEET?

Biological classification is an important and high-scoring topic in biology that helps you understand living species by comparing and contrasting their similarities and differences.

2. What is the number of questions that are asked from the NCERT book?

More than 80-85 percent of questions (asked directly or indirectly) in NEET come from NCERT, on average.

3. How do I find out if my NEET application has been rejected?