This document has been designed for the students who are preparing for NEET and want a synopsis of the chapter as per the NEET examination. Biodiversity and Conservation is a very crucial part of NEET and thus needs to be studied thoroughly to gain the maximum.

Important Topics of Biodiversity and Conservation

Edward Wilson, a sociobiologist, coined the term "biodiversity" to characterise the cumulative diversity at all levels of biological organisation.

The most crucial of these are:

(i) Genetic Diversity: Over the course of a species' distributional range, a single species may exhibit substantial genetic variety. The intensity and concentration of the active chemical (reserpine) produced by the medicinal plant Rauwolfia vomitoria growing in different Himalayan ranges may be affected by genetic diversity. India has around 50,000 genetically distinct rice strains and 1,000 mango kinds.

(ii) Species Diversity: At the species level, there is a lot of diversity. The Western Ghats,  for instance, contain a greater diversity of amphibian species than the Eastern Ghats.

(iii) Ecological Diversity: India, for example, has more ecological diversity than a Scandinavian country like Norway, due to its deserts, mangroves, rain forests, marshes, estuaries, coral reefs, and alpine meadows.

Plants and animals of various species can be found in each location. It's worth noting that the relationship between species richness and area for a wide range of taxa (birds, plants, freshwater fishes, and bats) is a rectangular hyperbola.

It's important to keep in mind that the relationship turns linear on the log scale and is given by the equation: 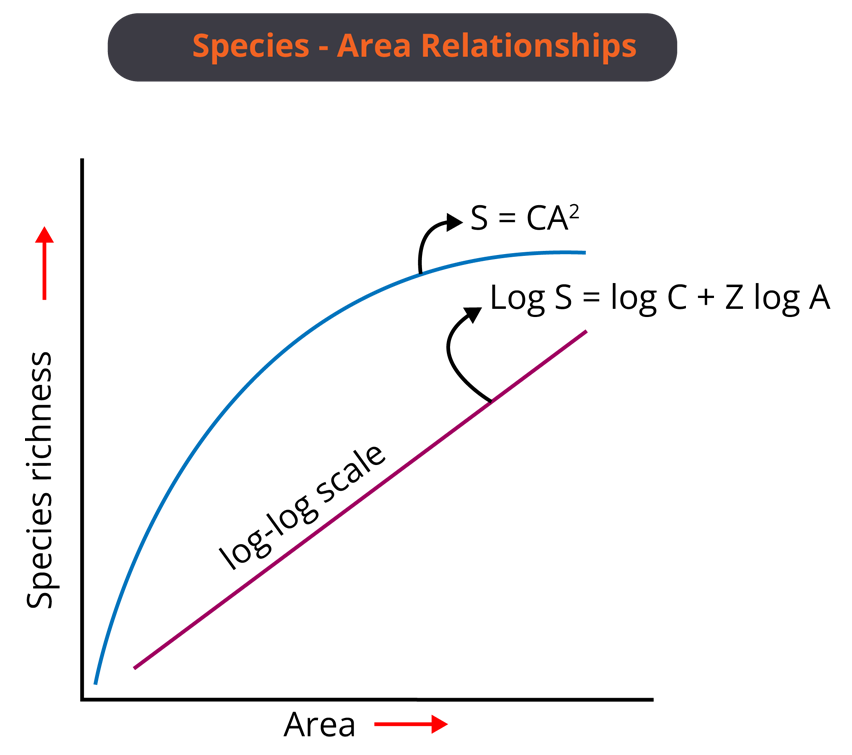 According to Edward Wilson, HIPPO is the major cause of destruction. HIPPO stands for “Habitat destruction, Climate change, Invasive species, Pollution, Human overpopulation and Over-harvesting.”

The Below-given Diagram Represents the Causes and Consequences of Biodiversity Loss. How Should We Conserve Biodiversity?

Biodiversity conservation is critical as biodiversity offers necessary services and resources supporting life on Earth. Biodiversity has societal benefits as well. One can preserve biodiversity by:

It refers to the methods for conserving all living species in their natural habitats and environments, particularly wild and endangered species. Biosphere reserves, national parks, and wildlife sanctuaries are examples of in-situ biodiversity conservation.

There are four hotspots in India, namely, the Western Ghats, the Himalayas, the Sundaland, and the Indo-Burma region.

It refers to the ways of preserving all live species in artistic habitats that mirror their natural living environments. Aquariums, botanical gardens, cryopreservation, DNA banks, and zoos are examples of ex-situ biodiversity protection.

The Below diagram shows the Biodiversity Conservation Management System Some Other Major Information

1. Give three hypotheses for explaining why tropics show the greatest levels of species richness.

Ans: Scientists have offered three main ideas to explain the diversity of organisms in the tropics.

2. The relation between species richness and area for a wide variety of taxa on a logarithmic scale is a:

Species richness rose with decreasing investigated area, according to AV Humboldt, a German scientist, inside a region (only up to a limit). As a result, for a wide range of taxa, the relationship between species richness and area appears to be a rectangular hyperbola.

Key Point to remember: On a logarithmic scale, the connection represents a straight line, as indicated by the equation log S = log C + Z log A.

3. Which one of the following is not included under in situ conservation?

Ex-situ conservation occurs in botanical gardens because the plants are preserved away from their natural habitat.

Key Point to Remember: A botanical garden is a space dedicated to the collecting, cultivation, preservation, and presentation of botanically named plants.

4. The total number of biodiversity hotspots in the world are:

Key Point to Remember: A biodiversity hotspot can be described as a biogeographic region with high biodiversity that is endangered by human presence.

1. According to Robert May, the global species diversity is about:

Select the option with the correct match of approach and method:

3. Which of the following regions of the globe exhibits the highest species diversity?

With an approximate 390 billion individual trees separated into 16,000 species, the Amazon represents over half of the world's surviving rainforests and is the world's largest and therefore most biodiverse tropical rainforest.

Key Point to Remember: The Amazon rainforest is home to the world's most biologically varied ecosystem and is popular for carrying 10% of all known species on the planet.

1. The Earth Summit was held in Rio de Janeiro in:

Seeing the poor condition of the environment and socio-economic development, the Earth Summit was held in Rio de Janeiro in 1992. It was to address biodiversity conservation and sustainable utilisation of resources.

2. The exotic species, introduced in India for its flower and leaf, is:

Water hyacinth is regarded as invasive all across the world due to its quick growth and ability to produce thick layers on the surface of the water.

These biodiversity and conservation notes can be highly beneficial to the students who are looking for the last minute revision notes. This article carries the sample questions that one can practise before an exam and have a clear understanding of the kind of questions that appear in the NEET examination.

1. How many questions from the previous year's exam papers are likely to be repeated in NEET?

2. What is the average number of questions appearing in NEET from the chapter Biodiversity and Conservation?

The average number of questions appearing in NEET from the chapter Biodiversity and Conservation is 2-3.

3. What is the weightage of the unit Ecology and Environment in NEET?

The unit Ecology and Environment, on the whole, comprises 4 chapters and makes a total weightage of 19%.