7 Seven Colours of the Rainbow

What Exactly is a Rainbow?

A bow or an arc of seven colours (a rainbow) is visible in the sky only when the rain occurs either in sunlight or due to other atmospheric conditions. The processes of reflection, refraction, and dispersion cause the rainbow formation. The sunlight that is casted in the sky opposite to the Sun produces rainbows.

The observer may not be able to see the rainbow in any location. It can be visible at an angle of 42 degrees from the light source's opposite direction. Due to the colour of the droplets, any single coloured light may pass through them, resulting in the change in colour.

Who Discovered the Rainbow?

In 350 BC, the Greek philosopher Aristotle began wondering about rainbows and their colours. Around 65 AD, the Roman philosopher Seneca the Younger took up his ideas and discussed them in Book 1 of Naturales Quaestiones. Seneca's logic was remarkably ahead of his time, even foreshadowing Newton's discovery of the prism effect centuries later. Thinkers, philosophers, and naturalists have studied the phenomena of the rainbow, noticing its appearance not only in the sky but also in other settings.

Water vapour or droplets and sunshine are needed in every case of characteristic colour flashes. Finally, by splitting light with a prism, Isaac Newton demonstrated that white light is made up of a spectrum of colours.

He also observed that the order in which the colours of a rainbow appeared never varied, and that they always appeared in the same order. He proposed that a spectrum contains seven colours: red, orange, yellow, green, blue, indigo, and violet (VIBGYOR when the initials of the colours are read in reverse).

The 7 colours of a rainbow can be listed as follows. 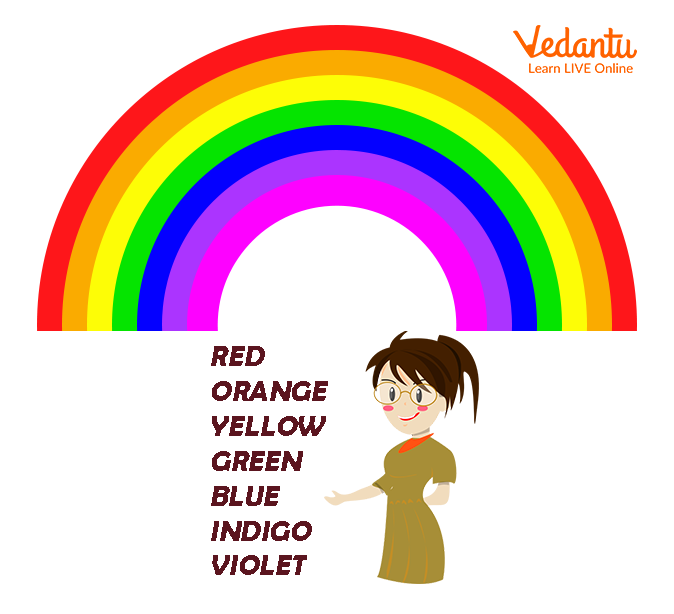 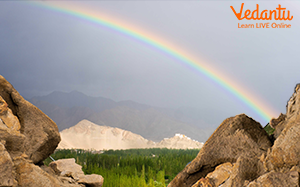 A Rainbow Behind the Hills

The Colours of the Rainbow and Their Meanings

Here's an overview of the rainbow's seven hues and what each one represents.

Red has the longest wavelength of any of the displayed colours. It's a vibrant colour that evokes powerful feelings.

Orange is the second colour in the rainbow and is a warm, vivid hue. It is a cheerful colour that makes people feel friendly and at ease.

Orange is a combination of the hues on either side (red and yellow), and it feeds off of both. The colour orange, for example, is created by combining the joy of yellow and the vitality of red. Orange in this context, according to the chakra system, indicates the energy that is generally associated with creativity, sexuality, and reproduction.

Yellow is said to be the happiest colour in the rainbow.

Green is the colour of life, and it may be found in the middle of the rainbow. It is also a colour that represents wealth in the West, which is why our money is green.

It's a vibrant colour that represents development and rejuvenation.

Blue, the hue of the sky and the sea, is associated with relaxation, calm, and stability. This should come as no surprise. When people want to unwind, they frequently turn to water. Simply changing the wallpaper on a computer background to an ocean view can help in this regard.

Blue is typically connected with divinity and is used to convey trust and loyalty because it is the hue of the skies.

Indigo is the most disputed colour in the rainbow.

Scientists and weather enthusiasts have debated for years whether indigo should be on the list at all because it is difficult to detect. Is indigo actually deserving of its own category, or are they mistaking it for blue or violet?

Along the same lines, people have debated whether indigo is blue or purple for a long time. The answer is that it is both. (However, indigo is three-quarters blue and one-quarter purple if you want to be more precise.)

Violet is one of the most popular rainbow colours. And rightfully so.

Violet has the shortest wavelength in the rainbow while red has the longest. Violet is the mildest colour of all, located on the opposite end of the rainbow from red. However, don't mistake subtlety with weakness. Violet has its own special superpowers.

Rainbow is a very interesting and natural pheomenon that every individual enjoys observing, irrespective of their age. Especially, children love to see it, when it appears.

Moreover, in the chakra system, it indicates the Sahasrara Chakra that coincides with the point where human consciousness connects with divine and spiritual consciousness.

FAQs on 7 Seven Colours of the Rainbow

1. Explain how to remember the rainbow colours.

We're taught how to memorise the colours of the rainbow utilising a mnemonic system from a very early age. This is a phrase that uses the first letter of each colour to form a new word, which then generates an easy-to-remember phrase.

Richard Of York Gave Battle In Vain is a classic mnemonic, but you can make up your own that is more relevant to you.

2. What is the top colour of the rainbow and why does it appear so?

The top colour of the rainbow is red. When sunlight passes through the raindrops, the wavelengths of white light are refracted by the drops, revealing the colours of the rainbow. We always see Red, which is the least refracted, followed by Orange, Yellow, Green, Blue, Indigo, and Violet (ROYGBIV).