A Human-Like Robot - Introduction to AI

It’s interesting to see that whenever you visit some websites you see ads, which are related to what you searched for before on online shopping websites such as Amazon, Myntra, Flipkart etc. Yes, You guessed it right. It is not a coincidence. It is all done by something called AI (Artificial Intelligence) technology.

AI technologies help you to perform your daily routine work more efficiently and accurately. In this article, we will be discussing Artificial Intelligence in detail and see how our life is getting smarter day by day thanks to artificial intelligence! Let’s get started!

A Simple Definition of AI Let us try to understand AI with an example: All of you must be familiar with Tarzan, the jungle boy, right? Do you remember that since he grew up in a forest, he was unable to speak English?

So, when Jane, the female protagonist, first tried to communicate with him, he could not understand her. So, she began to teach him. When he gave her the stone, she made a sad face. But when he gave her a flower, she made a happy face.

When he shouted, she did not like it, but when he laughed, she smiled as well. So, with a series of ‘good’ and ‘bad’ experiences, she succeeded in making him familiar with the acceptable social skills of normal humans.

And he learned it like that. That is precisely how an AI learns. Programmers insert a series of ‘yes’ and ‘no’ data in their system so that they can behave accordingly. This is known as “Data Feeding.” 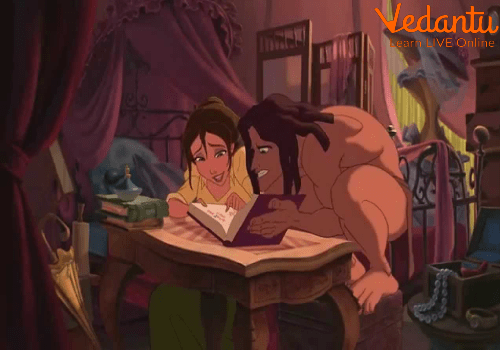 Jane and Tarzan Trying to Communicate, Just like AI

How to Start With AI?

It is very important for anyone who desires to learn AI to know any one of the machine learning languages. Rest comes later. R, C++, Javascript, Python, etc. are a few of the languages which can be used to do machine learning and artificial intelligence.

The most recommended language currently is Python because it is kind of the industry standard for machine learning and is easy for beginners to understand. It's not necessary to have humongous math knowledge but the basic skills are very important. Basics of calculus, probability and statistics are a must. Try coding and making your own small projects so that you get the knowledge about how to rectify, collect data, clean the data, data selection, pick a model, train model, test model, and mainly repeat it. A few of the online platforms which are highly recommended by the masters in AI are EDX, Coursera and Udacity. So, this is how to start with AI.

Booting Up - Step by Step Process and Types

Booting Up - Step by Step Process and Types

FAQs on Artificial Intelligence for Kids

To answer this question, we need to understand the concept behind what Machine learning really is. Machine Learning is a type of artificial intelligence that enables self-learning from data and then applies that learning without the need for humans to be involved. It is like adding life to some scraps of metals.  A good AI will make minimal errors. There are many Machine learning algorithms and protocols applied in different circumstances. Most AI systems are built up from what is called biologically inspired computing.

AI is used almost everywhere, almost in every device and our children are surrounded by that environment but still don't know the importance of how it actually works, why it is there, what it's doing and that makes it very important as to why AI for kids matters for our kids. Kids know how to command Siri to do something but are unaware of how exactly Siri is working. There are a few amazing AI learning platforms for kids available online which are suitable for beginners and teenagers.

3. Can AI really help us in our daily life?

Yes, definitely. It is not a myth that AI can help anyone to solve their everyday problems, however, it is not a magic wand that solves all the problems but it is a wiser approach to problem-solving and we should embrace that.

4. How would you define Artificial Intelligence?

Artificial Intelligence (AI) refers to computer-based systems which use several algorithms, such as logic and pattern recognition, reasoning, and learning for making decisions or performing tasks which are similar to those performed by human intelligence like deduction, creativity and imagination etc.