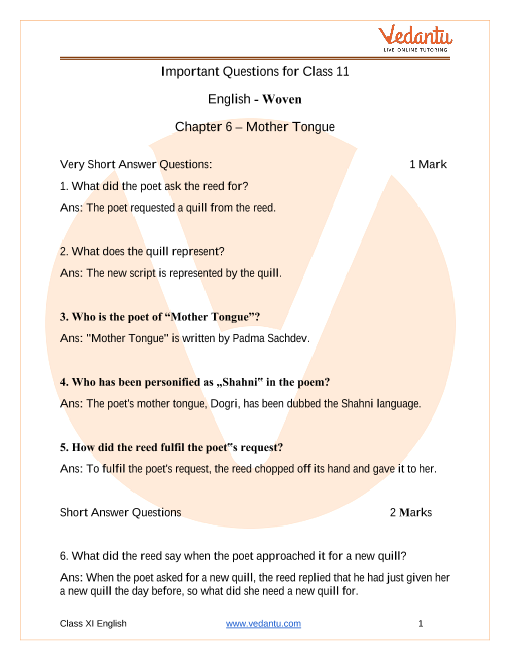 1. What did the poet ask the reed for?

Ans: The poet requested a quill from the reed.

2. What does the quill represent?

Ans: The new script is represented by the quill.

4. Who has been personified as „Shahni‟ in the poem?

Ans: The poet's mother tongue, Dogri, has been dubbed the Shahni language.

5. How did the reed fulfil the poet‟s request?

Ans: To fulfil the poet's request, the reed chopped off its hand and gave it to her.

6. What did the reed say when the poet approached it for a new quill?

Ans: When the poet asked for a new quill, the reed replied that he had just given her a new quill the day before, so what did she need a new quill for.

7. What did the reed think the poet to be?

Ans: The reed imagined the poet to be Shah's accountant, who needed a new pen every other day to keep track of his accounts.

Ans: The poet praises her "Shahni," who is a wealthy woman. She is a gracious woman who employs a large number of servants.

9. Why did the poet ask the reed to hurry?

Ans: The poet pleaded with the reed to hurry because she was worried that her "Shahni," whom she serves, would be on the lookout for her.

10. What did the reed say while giving the quill to the poet?

Ans: The poet received the reed's hand, which it had cut off. The reed urged her to accept the quill and indicated that he was also a servant of her "Shahni" while giving it to her.

11. Whom did the poet approach for the quill? What does the quill symbolize?

Ans: For a fresh quill, the poet approached the reed. The quill in the poem represents a language's script. It shows the change from one script to the next. The Dogri language in this poem evolved from the Sharade script, which evolved from the Brahmi script.

12. What does the reed regard the poet to be?

Ans: The poet was thought to be an accountant by the reed. He assumed the poet was working for some Shah, and that her job required her to prepare daily account books, hence the need for a new quill every other day.

13. What does the term “Shahni‟ symbolize in the poem?

14. Why does the poet ask the reed to hurry?

Ans: The poet is full of new ideas and wants to get them down before they become elusive and fade away in Dogri, her mother tongue. She requests that the reed hurry up and provide her with a new quill so that she can serve her mother tongue as her servant.

15. “The reed cut off its hand”, what does this symbolize?

Ans: The poet received the reed's hand after it was chopped off. This represents the movement of a script from one version to the next, where old scripts give birth to new scripts and the features of the previous script are carried over and incorporated into the new version.

16. Explain the significance of the quill in the poem “Mother Tongue”.

Ans: The quill signifies a new script in the poem. It symbolises the transition from an old script to a new script in which the old script's features are carried over and used in the new script. The Sharade script, which is said to have its roots in the Brahmi script, was used to write the Dogri language at first. The Sharade script was eventually replaced by the Devanagari script. The poem's new quill reflects the Devanagari script, which has supplanted the Sharade script of the poet's native Dogri language. She's on the lookout for a new quill to help her mother tongue in the greatest possible way.

17. What does the poet need a new quill for?

Ans: The quill represents the Dogri language's script. She is overflowing with thoughts and wishes to write them down in Dogri, her native tongue. Her mother tongue, however, requires the new Devanagari script, as the old Sharade script is no longer in use. As a result, she requests a new quill or script so that she might utilise it to jot down her thoughts and better serve her mother tongue.

18. What does “some sort of an accountant with some Shah” denote?

Ans: In the poem, the term "Shah" refers to any language, while the phrase "accountant" refers to poets and authors. Authors and poets serve a language by articulating their views in that language, so enriching it, just as an accountant works for a shah by preparing his financial books. The reed, which represents a new script, asks the poet about the language she offers in the poem. The reed believes that the poet is unconcerned with the language and that she, like any other poet, is looking for any script in which to write down her thoughts.

19. The poet holds her mother tongue in high esteem. Explain.

Ans: The poet's mother tongue is the "Dogri language." She is quite proud of her tongue. She refers to herself as a "Shahni," a term that implies a woman of high status and honour. She refers to her mother tongue as loving since it has a broad heart that can embrace multiple scripts such as Sharade and Devanagari. She is well-off, meaning that she comes from a wealthy family. She has a large number of servants, signifying that the Dogri language has a large number of poets and authors trying to improve and disseminate it.

20. Discuss the various personifications used in the poem.

Ans: The following are some of the personifications used in the poem:-