Write the structures of monomers used to obtain the following polymers:
(A) Neoprene
(B) PHBV
(C) Bakelite

Verified
Hint: Condensation polymers are formed when two bifunctional or trifunctional monomer units react with the elimination of small molecules like water, ammonia, alcohol, carbon dioxide, hydrogen chloride etc. and the process by which they are formed is called condensation polymerization.
Synthetic rubbers are any vulcanizable rubber like polymers which are capable of getting stretched to twice its length. When the stretching force is released, the synthetic rubber returns to its original shape and size.
Biodegradable synthetic polymers having functional groups present in lipids and biopolymers have been developed to prevent pollution.

Complete step by step answer:
(a) Neoprene is a synthetic rubber. Neoprene is a polymer of 2-chloro-1, 3-butadiene or chloroprene and so it is also called polychloroprene. The chloroprene needed for this purpose is prepared by the addition of hydrochloric acid to vinylacetylene. Neoprene is an excellent rubber like material. The polymerization reaction is shown below.

Hence the monomer of neoprene is chloroprene and its structure is:

(b) PHBV is a copolymer of 3-hydroxybutanoic acid and 3-hydroxypentanoic acid in which the two monomer units are connected by ester linkages. The properties of PHBV may vary according to the ratio of both the monomers. The polymerization reaction is shown below.

(C) Bakelite is a phenol-formaldehyde polymer obtained by the condensation of phenol with formaldehyde in presence of an acid or a base catalyst. The initially formed ortho or para hydroxyl derivatives further react with phenol to give novolac which on further heating with formaldehyde gives bakelite by cross linking. 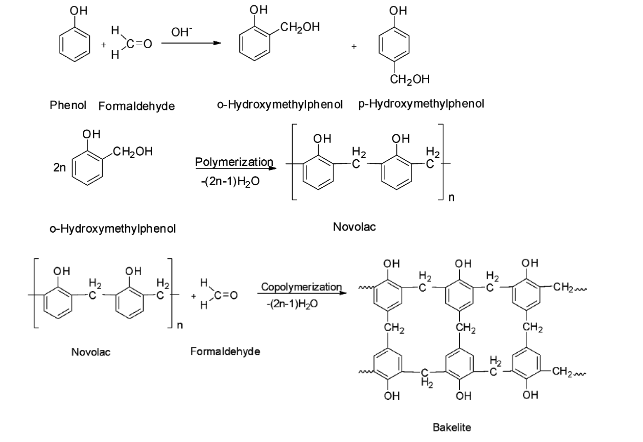 Hence the monomers of Bakelite are phenol and formaldehyde and their structures are:

Note:
- Bakelite is used in the manufacture of combs, fountain pen barrels and also used for making electrical goods.
- Neoprene is used as an insulator and for making conveyor belts.
- PHBV is used in orthopaedic devices and in controlled drug release.