Write a short note on: Cytoplasm and Nucleus.

Complete answer:
Cytoplasm:
- It is the part of the cell which lies between the nucleus and cell membrane.
- It is a jelly-like, colourless and transparent fluid, which is externally enveloped by plasma membrane and internally enveloped by a nuclear envelope.
- It is differentiated into inner granular endoplasm and outer clearer ectoplasm.
- The cytoplasm contains $90\%$ water and $10\%$ organic compounds like lipids, carbohydrates, proteins and inorganic ions like $Na^{+}, K^{+}, Mg^{2+}, Cl^{-}, Fe^{2+}$ etc.
- The cytosol is the soluble part of the cytoplasm which forms the ground substance of the cytoplasm and is located between the cell organelles.
- The cytoplasm holds all the cell organelles as well it protects them from the damage.
- It also helps in the formation of pseudopodia in Amoeba. 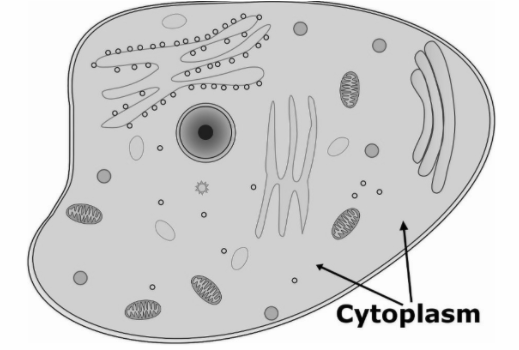 Nucleus:
- The nucleus was firstly discovered by Robert Brown.
- It is the large, centrally located and double membrane bound organelle that contains the genetic material.
- Usually a single nucleus is present in each cell.
- In Prokaryotes, a well-defined nucleus is absent which means their nucleus is not enclosed by a nuclear membrane.
- In all Eukaryotes, except mature mammalian RBCs and mature sieve tubes of higher plants, the nucleus is well organised, covered by a nuclear membrane.
- The nucleus regulates all the metabolic activities of the cells as well as how they store the genetic material.
- The main components of nucleus are- nuclear membrane, nucleoplasm and nucleolus.
- The nucleus helps in synthesis of some structural proteins required for the growth of cells. Difference between Cytoplasm and Protoplasm

Difference Between Nucleus and Nucleoid

Nucleus - What is Nucleus

How Do Plants Reproduce - Short Answer