Verified
146.4k+ views
Hint: The main source of energy present in animals including humans, fungi, and bacteria. It is a polymer of glucose chains having 8-10 units of glucose and is commonly called ‘animal starch’.

Complete answer:
Glycogen is a polysaccharide of glucose which is the main storage compound in the body especially in the liver and the muscles. It gives energy to the body during low glucose levels.

Additional Information:
-Polysaccharides are the most common type of carbohydrates present in our food.
-The monosaccharides together, when attached through glycosides bond, will result in the formation of the polysaccharides.
-The most common type of polysaccharides is glycogen and starch. They are also known as the storage polysaccharides.
-The other type of polysaccharide is known as the structural polysaccharides which are chitin, and cellulose. They are present in the cell wall of particular organisms.
-Glycogen is stored for longer periods in the adipose tissue (fat cells) known as triglycerides.
-Glycogen is secreted when the number of insulin increases and when the glucagon is present then it will break down into the molecules of glucose.
-From the liver, the stored glycogen is transported to the brain and the spinal cord.
-Glycogen is also stored in various other organs including blood.
-The glycogen which is stored in the form of glucose is about 14% in the liver, 80% in skeletal muscle, and 6% in the blood. 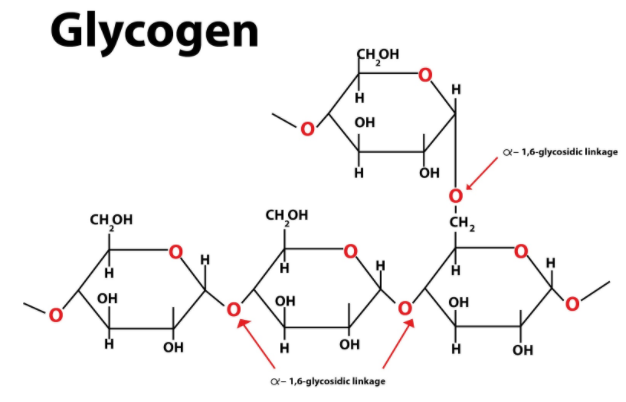 So, the correct answer is, “Glycogen.”