Which one is not a character of the hemochorial placenta?
(a) ${ CO }_{ 2 }$ and excretory products pass from foetus to mother’s body
(b) ${ O }_{ 2 }$ and nutrients from the mother’s body enter the foetus
(c) Chorion villi are covered by blood sinuses of mother
(d) It protects the foetus from mechanical shocks

Verified
129.3k+ views
Hint: The placenta is a brief connection which acts as a barrier between the foetus and maternal tissues. It is observed in Eutherians or placental mammals which give birth to live ones.

Complete answer:
Eutherians retain the embryos in the uterus or womb till an advanced stage which could be made possible with the development of the placenta. In humans and rodents, the hemochorial placenta is developed wherein the chorion villi originated from trophoblast of the foetus invades the maternal endothelium. Thus, the chorion villi are directly covered by the blood sinuses of the mother. Placenta also helps in the exchange of gases between the two as well as the elimination of nitrogenous wastes from the foetus.

Additional Information:
- After fertilisation, a series of rapid mitotic divisions called cleavage takes place where the cytoplasm of the zygote is divided equally among numerous smaller cells or morula.
- Morula is succeeded by the blastula stage. The blastula is composed of blastomeres which are arranged in an outer layer called trophoblast and an inner layer called inner cell mass. After around one week the blastula is embedded in uterine endometrial lining by the trophoblast cells.
- Around the time of implantation, the inner cell mass of the blastocyst forms a flat disc with an upper layer of cells, the epiblast and a lower layer, the hypoblast. Epiblast further divides to produce a human embryo.
- The placenta is formed by the association of foetus’ trophoblast and mesodermal cells from epiblast with mother’s endometrial tissue.
- The embryo is enveloped by an amniotic sac which is filled with an amniotic fluid to protect the growing embryo from any mechanical shock. 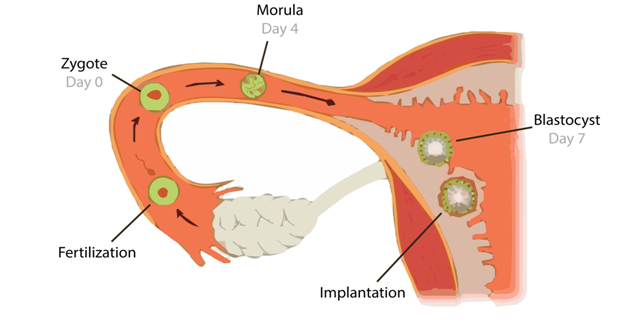 So, the correct answer is ‘protects the foetus from mechanical shocks.’