Verified
Hint: The shortest phase is a part of Meiosis I in cell division. It involves the separation of homologous chromosomes, which start moving towards the opposite poles after they are aligned at the equator.

Complete answer:
The shortest phase of mitosis is Anaphase I. In anaphase I, the sister chromatids (identical copies, formed by the DNA replication of a chromosome, with both copies joined by a common centromere) are pulled apart to opposite poles in the cell. The spindles are shortened at this point. 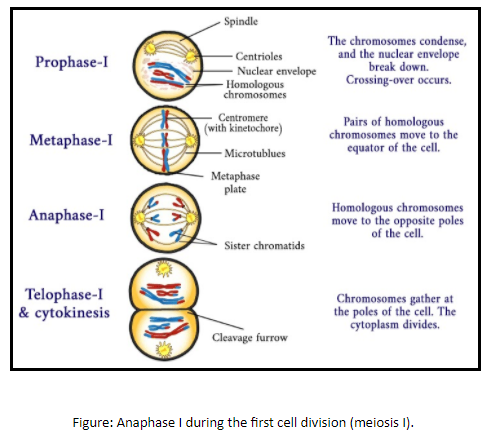 Additional Information: Some information about meiosis:
-During the meiosis, one cell divides twice to form four daughter cells.
-These four daughter cells only have half the number of chromosomes of the parent cell, so they are haploid.
-Meiosis is divided into nine stages. These are meiosis I when the cell divides for the first time and meiosis II when the cell divides for the second time.
-Prophase I is the longest stage of meiosis I.
-During metaphase I, the chromosomes are aligned at the centre of the cell and are ready to be divided.
-In meiosis, two sequential cell divisions occur but the DNA is replicated only once.
-Meiosis produces a new combination of genes due to crossing over of the genes and chance arrangement of bivalents (one pair of chromosomes or sister chromatids) at the equator.
So, the correct answer is, ’Anaphase I.’

Note: During late anaphase, the chromatids reach the opposite poles, which then move farther apart from one another and the cell prepares for the final stage of mitosis known as telophase I. The cell at this point, contains eight chromosomes.