Which among the following is a non-benzenoid aromatic compound?
A. o-xylene
B. Phenanthrene
C. Indole
D. Thiophene

Verified
146.4k+ views
Hint:Aromaticity means a conjugated system made of alternating single and double bonds in a ring. This conjugation allows the electrons in the molecule to be delocalized around the ring thus, increasing the molecule's stability.

Complete step by step answer:
To find the answer to this question, we should know what non-benzenoid compounds are, these are aromatic compounds which have highly unsaturated rings other than benzene rings. Aromatic compounds are cyclic and planar structures with a ring of resonance bonds. Aromatic molecules are very stable. Let us discuss the options one by one to find non-benzenoid aromatic compound:
A. o-xylene: It is also known as ortho-xylene is an aromatic compound with the formula ${{\text{C}}_{6}}{{\text{H}}_{4}}{{\left( \text{C}{{\text{H}}_{3}} \right)}_{2}}$. The two methyl groups bonded to adjacent carbon atoms of a benzene ring. It is an isomer of m-xylene and p-xylene and their mixture is called xylene or xylenes. Its structure is By structure it is clear that it is a benzenoid compound.
B. Phenanthrene: A polycyclic aromatic compound composed of three fused benzene rings. It is made up of phenyl and anthracene. Its structure is As it is a fusion of benzene rings then, it is a benzenoid compound.
C. Indole: Its molecular formula is ${{\text{C}}_{8}}{{\text{H}}_{7}}\text{N}$ and it is an aromatic heterocyclic organic compound. Its structure is bicyclic consisting of a six-membered benzene ring attached to a five-membered pyrrole ring. Its structure is 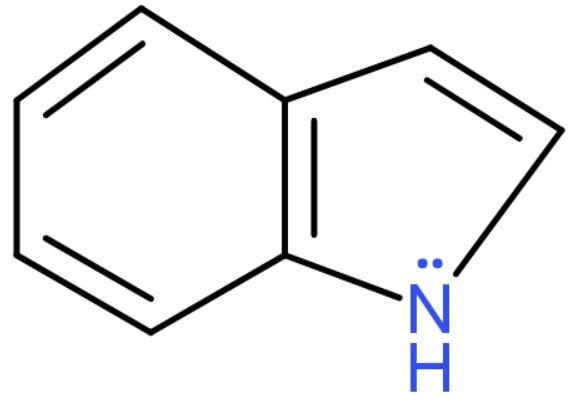 The lone pair on nitrogen is in resonance with the rings and satisfies Huckel’s Rule (the compound should have $\left( 4\text{n}+\text{2} \right)\pi \text{ }{{\text{e}}^{-}}$ in it). This compound has 10 $\pi {{\text{e}}^{-}}$in it which satisfies the rule. It has benzene attached to it. So, it is a benzenoid aromatic compound.
D. Thiophene: Thiophene is aromatic, heterocyclic compound with molecular formula ${{\text{C}}_{4}}{{\text{H}}_{4}}\text{S}$. Consisting of a planar five-membered ring. It resembles benzene. The lone pair on sulphur is delocalized in the pi electron system. Its structure is The correct answer to this question is option ‘d’ (Thiophene).