What is the acceleration of the box? 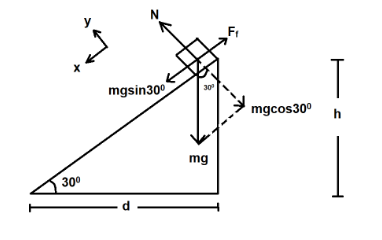 Verified
94.2k+ views
Hint: We know that total force on an object remains zero. Here, we will take the box as the object and then will equate all the forces acting on it.

Additional Information
The diagram we dealt upon is known as free body diagram in scientific terminology. It is actually a schematic representation of a real life problem taking into account the relative magnitudes and force acting on an object in a given situation.
The frictional constant $ \mu $ multiplied by the mass of the target object is the value up till which the object is acted upon by static friction and beyond this barrier the friction gets converted into kinetic friction. The value of kinetic friction is a bit lower than that of the static friction. In other words, we can say that the barrier is after which a body starts to move.