Complete answer: Sclereids are part of the sclerenchyma tissue (reduced form of sclerenchyma) and exhibit a wide range of shapes and sizes.
They are present in several tissues of the plant, namely, the periderm, the cortex, the pith, the xylem, and also in the phloem.

Along with these structures they form a major part of fruits giving them the unique texture, and also constitute the hard shell of nuts and the outer coating in many seeds.
Testas i.e. seed coats of many plants, especially leguminous plants, are made up of two layers of macrosclereids.
Macrosclereids are elongated in shape. These cells are basically responsible for restricting the water uptake by hard seeded legumes. There is a visible light line present in a continuous line just beneath the outer surface of the macrosclereids in some legume seed coats. It is essentially due to the optical refraction properties possessed by these macro sclereid cells. Astrosclereids are another type of sclereids and have been found in the floating leaves of water lily. They are branched, pointed, and often star-shaped (hence the name astrosclereid). Given below is a clear diagram showing the arrangement of the macrosclereids in the seed coat of a legume. 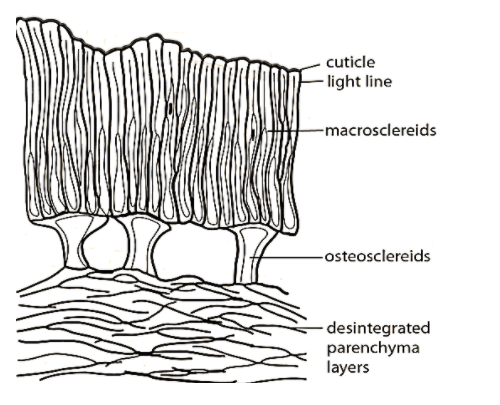 So, the correct answer is A. Macrosclereids.