Complete step by step answer:
We know that Xenon trioxide is formed on hydrolysis of xenon hexafluoride and the electronic configuration of xenon is $n{s^2}n{p^6}$ where d-orbital is vacant and thus involved in the hybridisation and the structure of xenon trioxide can be seen as below:

We also know that sigma and pi-bonds are formed by overlapping atomic orbitals. End to end overlapping of atomic orbitals results in sigma bonds formation and pi bond is formed by sideways overlapping of atomic orbitals. And the participation of d-orbital in hybridisation can take place when d-orbitals are lying vacant or partially filled.
Similarly, in the structure of xenon trioxide, it has three $p\pi - d\pi $ bonds which correspond to the p-orbital from the oxygen atoms and the d-orbital is from the xenon atom.
Similarly, the structure of xenon tetroxide is given and the electronic configuration is again the same and it also possesses a vacant d-orbital. So the structure is given as: 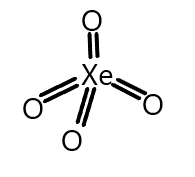 Note: Always remember that the xenon trioxide,$Xe{O_3}$ is a colourless explosive solid and has a pyramidal molecular structure and the xenon tetroxide,$Xe{O_4}$ possess a tetrahedral structure both and both these molecules contains a total of three and four $p\pi - d\pi $ pi-bonds respectively.