Complete answer:
The function of the mesosome in prokaryotes is both aerobic respiration and cell wall formation. Mesosomes are also known as chondroid. The plasma membrane is selectively permeable in nature and interacts with the outside world. This membrane is similar to that of the eukaryotes. Mesosomes perform the following functions:
-They help in cell wall formation.
-They participate in DNA replication.
-They aid in the distribution of DNA to the daughter cells.
-They also help in the respiration process, secretion process, to increase the surface area of the plasma membrane and enzymatic content. Mesosome is found in gram-positive bacteria.
-In some photosynthetic prokaryotes like cyanobacteria and purple bacteria, there are other membranous extensions into the cytoplasm called chromatophores which contain pigments.

Additional information:
-Mesosomes were first observed in 1953 by George B. Chapman and James Hillier. They referred to them as peripheral bodies.
-The term Mesosomes was coined by Fitz-James in 1960.
-These are analogous to cristae in mitochondria in eukaryotic cells, which are finger-like projections and help eukaryotic cells undergo cellular respiration. 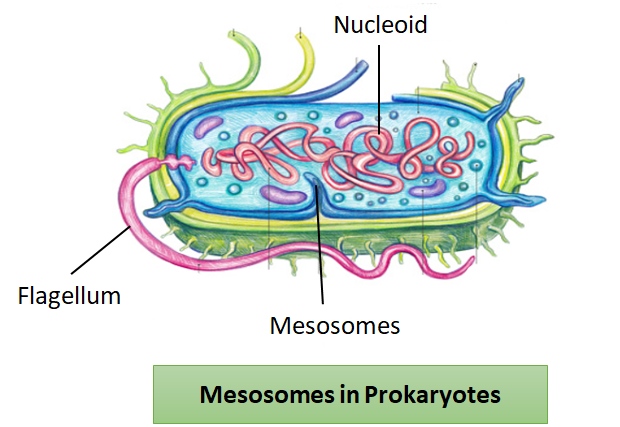