Verified
Hint: These buds are present in the axil of the leaves and are capable of forming branches or a flower and eyes of the potato. Each bud has the potential to form shoots and maybe specialized in producing either the vegetative shoots (stems and branches) or reproductive shoots (flowers).

Complete answer:
The eyes of the potato tuber are the axillary buds. The axillary bud (or lateral bud) is an embryonic shoot located in the axil of the leaf.
The roots buds: They generally arise on the main roots or upper lateral roots within 25 days after the seedlings are established and are generally associated with the base of lateral buds.
The flower buds: It is considered as an undeveloped or embryonic shoot that grows at the axil of leaf or stem.
The shoot bud: It is a compact underdeveloped young shoot consisting of a shoot apex, compressed axis, and several closely overlapping primordial (early stage) arching (curve-shaped) over the growing apex. 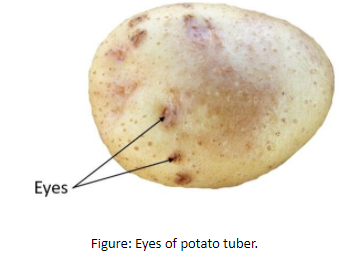 Additional Information:
-Axillary buds can be used to differentiate whether the plant is single-leafed or multi-leafed. This can be determined by counting the number of leaves after an axillary bud. If there is only one leaf, then the plant is considered single-leafed, if not, then it is considered multi-leafed.
-Certain plant diseases, such as phytoplasmas, can cause the proliferation of axillary buds, and cause plants to become bushy in appearance.
So, the correct answer is, ‘Axillary buds.’

Note: Axillary buds do not become actively growing shoots on the plants with strong apical dominance (where the main or central stem is dominant). Apical dominance occurs because the shoot apical meristem produces auxin that prevents axillary buds from growing.