Verified
Hint : The conformations of butane can be interconverted only by rotation around the central carbon atoms in butane.

Complete answer :
Butane is a form of carbon molecule that exists in three forms when we see molecules in Newman projection or sawhorse projection.
Conformational isomerism is a form of stereoisomerism in which the isomers can be interconverted just by rotations about single bonds. These conformations change only by single carbon carbon rotation. In butane, four such conformations are possible which are fully eclipsed, eclipsed, gauche and anti. 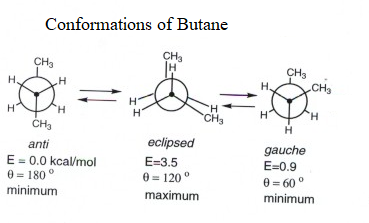 The three conformations of butane given in question i.e. eclipsed, anti and gauche can be interconverted by rotation around $C2 - C3$ linkage.
Thus, option d.) is the correct answer.
The rotations around C-H in methyl will not show any difference. SO, option a.) and b.) can not be the answer.

Additional information :
From the diagram we can also conclude that anti conformation is most stable because in anti conformation, the two methyl groups on both carbon atoms are placed at dihedral angle of 180. Thus, the steric hindrance is minimum in this position.

Note : If we make Newman projection using carbon 1 and 2 then the front carbon will contain H atoms only and they do not impose steric hindrance and thus, such conformations are not always possible.

Physical Properties of Alkanes and Their Variations