The coconut water and the edible part of coconut are equivalent to ____.
(a) Endosperm
(b) Endocarp
(c) Mesocarp
(d) Embryo.

Verified
Hint: The layer matures into their cellular phase and deposits into the rind of the coconut meat.

Complete answer:To answer this question, at first, we have to know the endosperm part of coconut. Coconut water is the endosperm a part of the coconut plant. Endosperm is the most usual nutritive tissue for the development of embryos in Angiosperms and develops as post-fertilization shape from the primary endosperm nucleus. The coconut endosperm is a nuclear type.

Now lets us find the solution from given options –
Coconut fruit is a drupe. It has a membranous epicarp, fibrous mesocarp and stony endocarp.
The endocarp encloses a single seed with brown testa that consists of a small embryo and a white oily endosperm (suitable for eating part) with watery fluid referred to as coconut water. 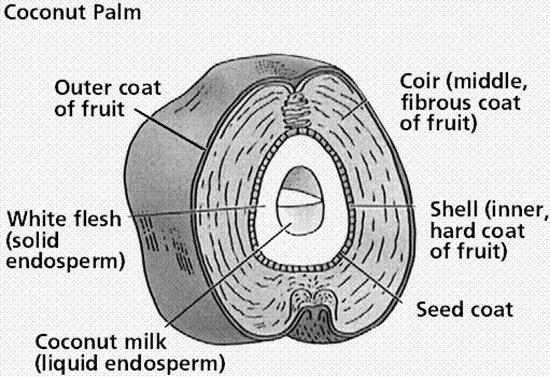 Coconut is surrounded by means of the hard woody layer referred to as the endocarp. The endocarp surrounds the seed.
The outermost layer of coconut, that's typically soft with a greenish color, is referred to as the exocarp. After that the next layer is the fibrous husk, or referred to as a mesocarp.
In a few mature coconuts, we can see the soft, spongy part inside the center when we crack or open the coconut. This is simply a coconut cotyledon, which is also recognized as coconut embryo or coconut apple.

Thus, the correct solution is, ’Endosperm’.

Morphology and Anatomy of Earthworm

Pollution of Air and Water

Interdependence of Plants and Animals

Conservation of Plants and Animals

Scientific Names of Animals and Plants

What are the Successor and Predecessor?