Verified
91.8k+ views
Hint: It is a genus of invertebrate freshwater animals in which their cells are arranged in two germinal layers. It has symmetry with about a central axis means if it is sliced then all parts will be exactly the same.

Complete answer:
Hydra is a genus that is classified under the phylum Cnidaria, they are small, multicellular, cylindrical, and fresh-water organisms. They have tiny, tube-shaped bodies that contain several tentacles on one end. The body cavity is a coelenteron (gastrovascular cavity) which helps in the digestion and circulation of food. Hydra is an organism that has two embryonic or tissue layers that are the ectoderm and the endoderm. The ectoderm and endoderm form the inner gastrodermis and outer epidermis separated by the mesoglea. Hence, it is referred to as diploblastic. The epidermis acts as the protective and sensory layer and is covered by a thin cuticle. It is composed of epithelial-muscle cells, gland cells, interstitial cells, and the cnidoblasts. Epithelial cells play a major role in covering and contraction, gland cells secrete the sticky attachment substance and gas bubbles, interstitial cells involved in reproduction and regeneration, and the Cnidoblasts which act as stinging cells. The body of Hydra can be divided into two identical halves when a central axis passes through it, it exhibits radial symmetry.
So, the correct answer is diploblastic and radially symmetrical.

Note: The name of phylum cnidaria is derived from the cnidoblasts or cnidocytes because they contain the stinging capsules or nematocysts present on the tentacles and the body. Cnidoblasts help the organism in anchorage, defense, and the capture of prey. 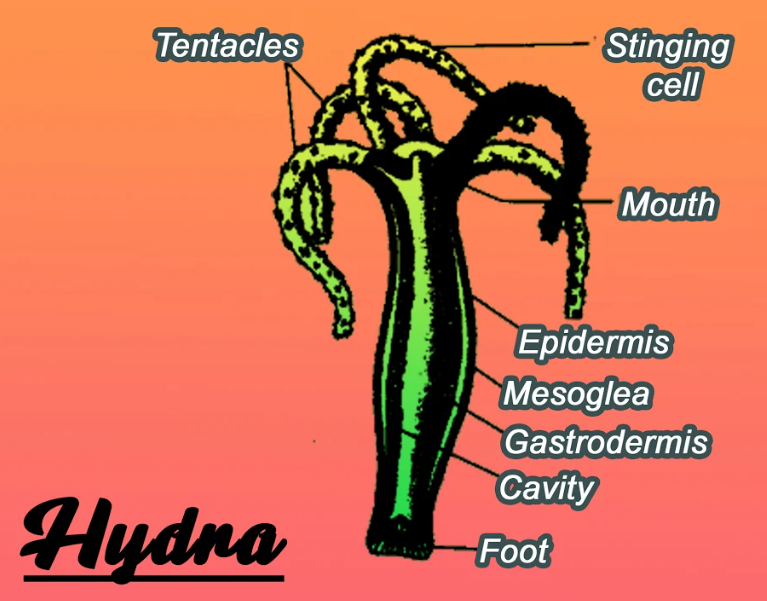