Verified
91.5k+ views
Hint: Insects form a large group of animals that are found almost everywhere. Insects are characterized by their paired legs, wings, and antennae attached to different sections of their bodies. Usually, insects bear three pairs of legs, one pair of antennae, and two pairs of wings.

Complete answer:Insects are considered the most successful animals as half of the known animals are insects. They can survive in the harshest of environments. Bees, ants, butterflies, cockroaches, etc. are all insects. An adult insect has three major parts called head, thorax, and abdomen. The head consists of the brain and mouth along with sense organs like eyes and antennae. Most insects have two antennae. 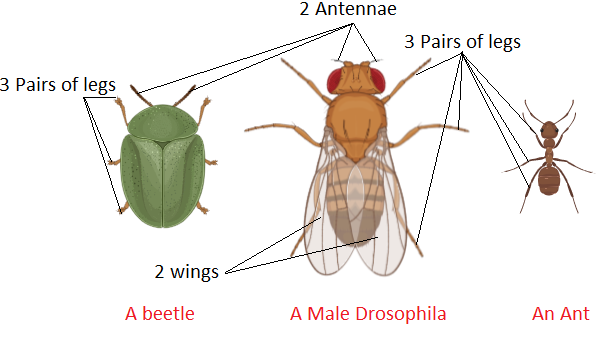 The thorax segment of the body of insects consists of wings and legs. The abdomen section consists of the heart, digestive system, and reproductive organs. Joined to the abdomen section, there are usually three pairs of jointed legs and usually two pairs of wings. This means insects usually have two to four wings. Also, the insect’s body is protected inside the hard exoskeleton or external skeleton. The young insects change their exoskeletons many times before reaching the adult stage.
Insects are very important for the environment as bees help in the pollination of flowers and many insects work as biological control agents for pests. Bees also provide us with essential products like honey, beeswax, etc.

So, from the above discussion, we can conclude that option C) is the correct answer.