What is meant by the gene gun method?

Verified
Hint: A technique that is used to transfer the genes in the plant cells directly without any hindrance. It is the easiest way of introducing the genes into the plants without requiring any other substance for transfer.

Complete answer:
A biolistic or gene gun is a technique of genetic engineering where the genes, DNA, RNA, or proteins are transferred to the plant cells without the use of any vectors. The genetic material is coated with heavy metal and using the mechanical force the genes are fired into the cells.
The object through which the genes are fired is called micro-projectiles. This technique is used to form an individual of desired genetic makeup. It involves micro-projectiles as guns are named as a gene gun and also helps in transforming any type of cell including the nucleus. It can also transform certain cell organelles like mitochondria and plastids.
The DNA which is to be integrated is known as the DNA construct which contains all the required traits and elements. The cells in which the DNA construct is to be integrated is known as the target cells. This DNA or gene construct consists of the following sequence, promoter, terminator, gene of interest, and a reporter gene. It is used in transferring the DNA vaccines to the studying of diseases.
There are certain drawbacks also with this technique which involves the introduction of the DNA construct randomly into the target cells. This may result in the formation of the transgene in some constructs while in some constructs it is not formed at all. 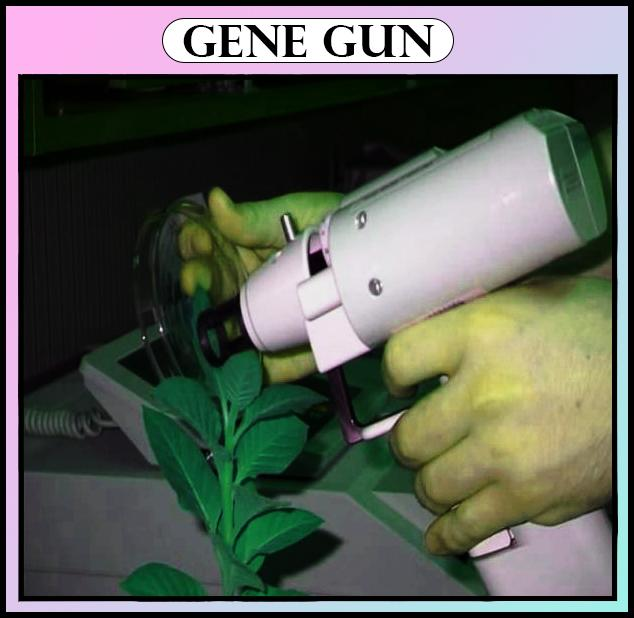 Note: The technique was invented by various scientists including John. C. Sanford, Ed Wolf, and Nelson Allen from Cornell University in 1983. Another scientist of Du Pont Ted Klein also worked on it in 1986. The gene gun was earlier a Crosman air pistol which was modified such that it can fire tungsten particles. Onion cells were the first target cells on which this technique was used.