What is meant by the chelate effect? Give an example.

Verified
129.3k+ views
Hint: Chelate is a term related to coordination compounds. When a di- or polydentate ligand uses its two or more donor atoms together to bind a single metal ion then it is said to be a chelate ligand. The number
of such ligating groups is called denticity of the ligand. 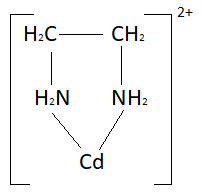