What is meant by hydroboration-oxidation reaction? Illustrate it with an example.

Verified
Hint: Hydroboration oxidation is an anti-markovnikov addition of water across alkene. Also, it is a two-step organic reaction. End product is alcohol.

Complete step by step solution:
- It is known to you that hydroboration oxidation is a two-step organic reaction.
- It is an organic reaction that converts an alkene into an alcohol by the net addition of water across the double bond. THF(Tetrahydrofuran) is used as a solvent.
- The hydrogen (H) and hydroxyl group (OH) are added in a syn (addition of addendum on the same side of the alkene or alkyne) addition leading to cis stereochemistry.
- Hydroboration-oxidation is an anti-Markovnikov’s addition of water across an alkene. The -OH group is added to the less substituted position and the -H is in the more substituted position.
- If there is more than one chiral center in the product, then the product will produce a pair of enantiomers that results from syn addition. A common example of oxidation of 1-Propene is given below.

- Here, we can see that first, $B{{H}_{3}}$ is added to the carbon-carbon double bond in a way that H-atom gets bonded to a carbon that has less number of hydrogen atoms(means in anti-markovnikov manner). Then, in presence of hydrogen peroxide-an oxidising agent, the organo-borane compound decomposes and gives an alcohol as shown in the reaction.
- One molecule of $B{{H}_{3}}$ can oxidise three molecules of alkene because one B-H bond is responsible for the oxidation of one molecule of alkene. After oxidising alkene, B-H bond gets converted into B-OH bond. So, $B{{H}_{3}}$ has three B-H bonds, and it will oxidise total of three alkenes and will give ${{H}_{3}}B{{O}_{3}}$ in the end. We can show how one molecule of $B{{H}_{3}}$ oxidises three molecules of alkene as below. 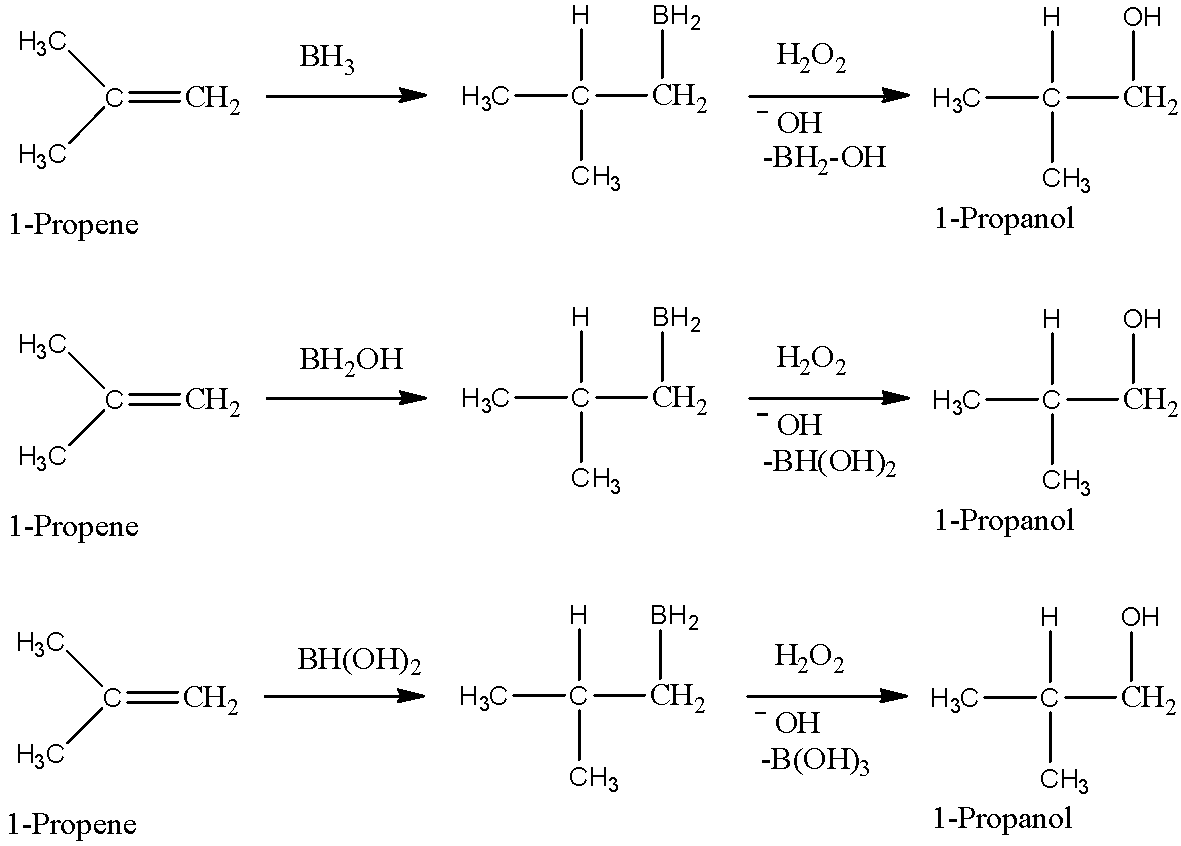 Note: Remember that it will give an anti-markovnikov product after addition to the alkene double bond. We cannot use water as a solvent here because it will immediately react with $B{{H}_{3}}$ as water has an amphoteric nature and $B{{H}_{3}}$ is a lewis acid.