Verified
147k+ views
Hint: Monocots have parallel venation in leaves and they possess fibrous or adventitious roots whereas on the other hand dicots have reticulate venation and possess tap root.

Complete answer:
False, Mango is not a monocot plant. The scientific name of mango is Mangifera indica.
-It is a dicotyledonous plant because of the presence of two cotyledons in the seed of this plant. The ovules develop into seeds after fertilization. A seed comprises a seed coat and an embryo. Moreover, the embryo consists of an embryonal axis and one or two cotyledons.
-The leaves of Mango trees show reticulate venation and have a well-developed tap root system. Both these conditions occur in dicots.

Additional Information:
Structure of Dicotyledonous seed
-Seed coat: It is an outer tough covering of the seed. It develops from the integuments of the ovule. The seed coat possesses two layers, the outer one is testa and the inner one is known as tegmen. The hilum is a scar on the seed coat by which the growing seeds are bound to the fruit. Above the hilum is a tiny hole called the micropyle.
-Embryo: It is the most important part of the seed. It comprises an embryonal axis and two cotyledons. The cotyledons are often fleshy and full of reserve food materials, just like mango. At the two margins of the embryonal axis, there are the radicle and the plumule.
-Endosperm: It is formed as a result of double fertilization. In some seeds such as castor it is a food storing tissue. But in plants such as bean, gram, and pea, the endosperm is not present in mature seed. Such seeds are known as non-endospermous. 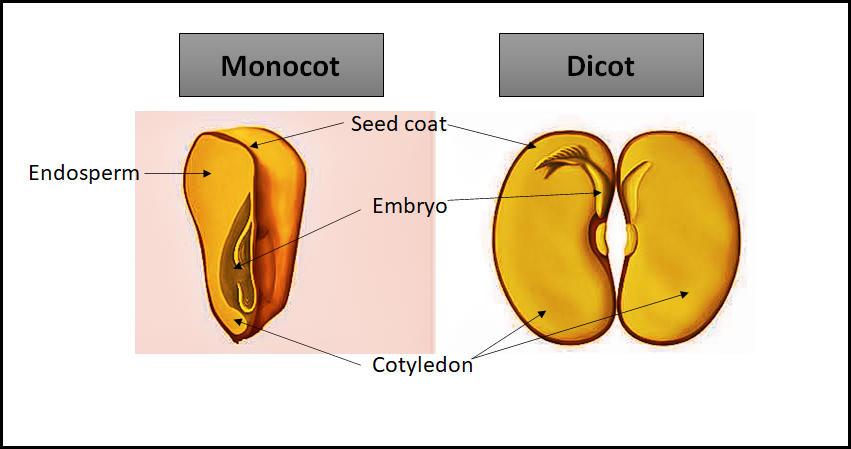 So, the correct answer is ‘False’.