Complete step by step answer:
-When a non-volatile solute is added in a pure solvent, some solute molecules occupy the surface area along with molecules of pure solvent and the pure solvent’s tendency to go into vapour phase decreases due to which the vapour pressure of solution decreases. This means that the vapor pressure of solid and liquid solvent becomes equal at lower temperature. This is called the depression in the freezing point.
-Let us take example – 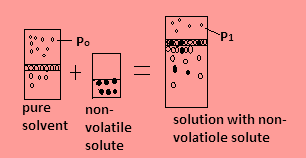 Suppose in the closed container, water is the pure solvent in the figure and its freezing point is \[{0^ \circ }{\text{C}}\] and water’s vapour pressure is suppose ${{\text{P}}_0}$ as evaporation at the surface of the water continues then-
1. When non-volatile solute is added in the water, the solution formed has vapor pressure ${{\text{P}}_1}$ which is less than the vapour pressure of the solvent as the number of particles in the solution increases due to solute and they occupy the surface area but they have less tendency to forms vapours.
2. The freezing point of solution becomes $ - {1^ \circ }{\text{C}}$ or less. This means the freezing point decreases when non-volatile solute is added. Since the molecules of solvent are more than that of solute so the molecules of solvent solidify at freezing point.

Hence, correct options are A and D.

Additional Information:
In the given graph, relation between vapour pressure and temperature is given for depression of freezing point- 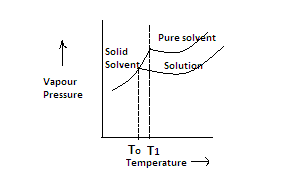 Note:
Depression of freezing point is also given as-
$\Delta {\text{T = }}{{\text{K}}_f}{\text{m}}$ where m is the molality and ${{\text{K}}_f}$ is the cryoscopic constant which depends on the properties of solvent and solute. Molality is the number of moles of solutes dissolved in one kilogram solvent.

Electric Field Due to Point Charge

Magnetic and Electric Force on a Point Charge

Significance of Genetics in the Process of Evolution