Verified
147k+ views
Hint: Student taking at least one of the drinks means we need to find the probability of the student taking either one or both the drinks. As we have three values corresponding to three events, the formula connecting those is the probability union formula from which we will obtain the result.
* Indicating the given information as a Venn diagram and denoting each event as a letter, makes solving simpler.
* Probability of an event =Number of favourable event/Total event
* For two events A and B probability of happening of event A or event B, $P(A \cup B) = P(A) + P(B) - P(A \cap B)$

Complete step-by-step answer:
Venn diagram corresponding to the given information is as follows: 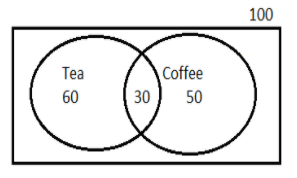 Note: Students mostly make the mistake of assuming the meaning of at least as either tea or coffee but it also includes people consuming both tea and coffee as well so we find the value of union.