Verified
Hint: First we will draw the Venn diagram with universal set U and subset A. Then we will solve this question by understanding the meaning of complement of a set, and then what is union and intersection of sets. We can check each option by trying to relate the concepts and find the sets. Then, we will be able to prove all the given options.

Universal set: The set containing all objects or elements and of which all other sets are subsets.
Complement of a set: Complement of a set A, denoted by A c, is the set of all elements that belongs to the universal set but does not belong to set A.
Union: The union (denoted by $\cup $ ) of a collection of sets is the set of all elements in the collection. It is one of the fundamental operations through which sets can be combined and related to each other.
Intersection: The intersection of two sets has only the elements common to both sets. If an element is in just one set it is not part of the intersection. The symbol is an upside down $\cap $ . 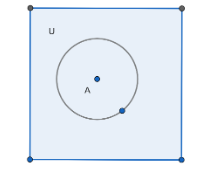 From the diagram and definition of union we can see that $A\cup A'=U$.
Hence we have proved (d).
Now we will prove (e),
First we will look at A’,

From the diagram and definition of intersection we can see that $A\cap A'=\phi $.
Hence proved (e).

Note: Here we have used the definition of the given terms and also the Venn diagram to prove the above statements. Venn diagrams are very helpful to solve these types of questions. We must solve this question carefully using the concepts correctly instead of just proving them somehow. So, it is necessary to draw a Venn diagram for each option, apply the concepts and then prove them. We must not get confused between concepts of the union and intersection of sets.

Transistor as a Device