How does fish move in water?

Verified
91.5k+ views
Hint: Fish is an organism that lives only in water and cannot survive outside water, i.e. they are aquatic animals, which live, move as well as reproduce in water.

Complete step-by-step answer:
Aquatic animals as the name suggest; aqua means water i.e. any animals that permanently live in water or spend most of their lifetime in the water. There are different varieties of organisms living in water with different characteristics ex. Fish, sea reptiles, and marine mammals.
As we know fishes are vertebrates living in the water. Vertebrates are organisms having a backbone made up of bones and cartilages. They are cold-blooded animals, which means that their body temperature is not constant, it varies depending upon the temperature of water i.e. its surroundings. For breathing, fish uses gills, which help them to take up dissolved oxygen from the water. If we carefully observe, all the fishes have a similar body structure known as streamline body which is broader at the center and tapering or pointing at both ends. Fishes use fins for movement. There are five different types of fins in fishes:
Dorsal Fin: This is located at the back of the fish and helps fish to stabilize against rolling and helps during sudden turns. Some fishes have two sets of dorsal fins while some have only one.
Caudal Fin: also known as the tail fin, can be rounded or crescent-shaped. This fin helps in the speed and movement of the fish.
Pectoral Fin: Pair of pectoral fin along the sides of the body helps to steer i.e. changing directions.
Pelvic Fin: These are also two along sides and are also used for steering. Both pectoral fin and pelvic fin can be moved independently to quickly move in any direction.
Anal Fin: This is located near the anus and also helps in the stabilization of fish. 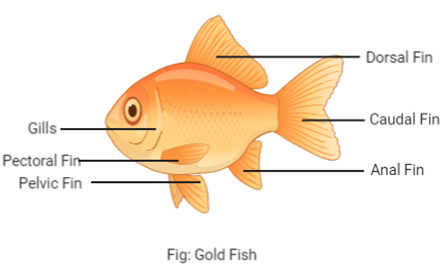 Fins are used by fish to move forward, backward, to move fast, or even to stop whenever needed. Just like fins, the streamlined shape of the body helps fishes reduce friction with the water. Some fishes also have a specialized structure called a swim bladder that can be filled or emptied with air to help them move up and down in the water. Fish use their swim bladder to keep up from sinking also known as buoyancy (tendency to float). The swim bladder works somewhat like a hot air balloon, the more gas it contains, the higher a fish will suspend or float in the water. Some fishes also use swim bladders to make sounds and communicate.