Complete answer:
Cuscuta is a parasitic plant because its leaves are reduced, so least photosynthesis occurs within this plant. Hence, it has to depend on other plants for its survival. After it attaches itself to a plant, it wraps itself around it. If the host has food beneficial to this plant, it produces haustoria that inserts itself into the vascular system of the host. The original root of the Cuscuta then dies in the soil. The dodder can grow and attach itself to a number of plants. 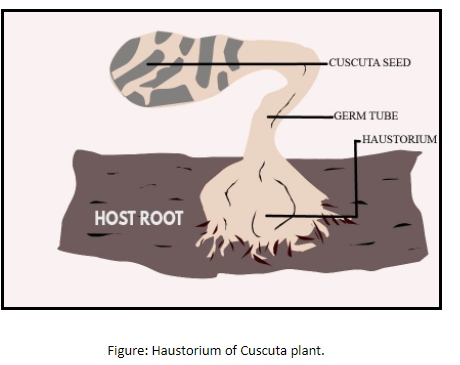 Additional Information: -Cuscuta is also known as the dodder plant.
-Cuscuta is the total stem parasitic.
-Cuscuta plant is an ectoparasite that lives on the outside of the host.
-Dodder is found on a vast variety of plants, including several agricultural and horticultural crop species, such as alfalfa, lespedeza, flax, clover, potatoes, chrysanthemum, dahlia, helenium, trumpet vine, ivy, and petunias.
-Zea mays are the maize, cactus is the xerophyte and Monotropa is a flowering plant, and its roots have a mycorrhizal association and lack haustoria.
So, the correct answer is, ‘Cuscuta.’