Find the equation of line which makes an angle $\alpha $ with x-axis and cut an intercept of length a on it.

Complete step-by-step answer:
We have information given from question as
Line makes an angle $\alpha $ with x-axis
Line cuts an intercept of length ‘a’ with x-axis
We know that slope of any line is defined as the tan of angle formed by line with the positive direction of x-axis. Here the angle given is $\alpha $ with the x-axis from point (1).
Hence, the slope of the given line is tan$\alpha $.
Now, coming to the second point; the intercept with x-axis is ‘a’. We already know that the intercept of a line is the length from origin on that axis to the point where the line cuts the axis.
Here, line has intercept of ‘a’ on x-axis, hence we can represent the given line as; 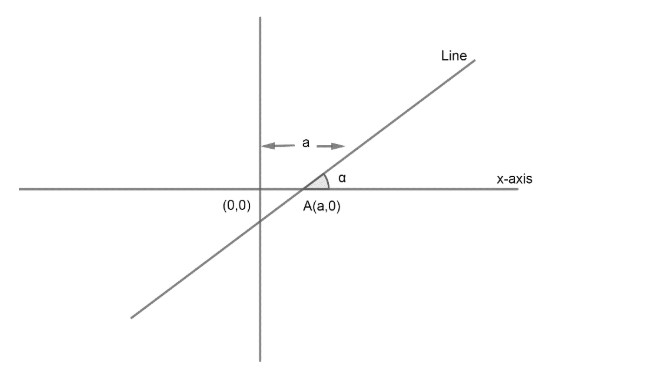 Note: One can go wrong with the intercept ‘a’ given. One can take that intercept on y-axis and write the equation of line by y = mx + C, where C is y-intercept and m is slope. Hence the above equation becomes $y=x\tan \alpha +a$ which is wrong as ‘a’ is intercept on x-axis not on y-axis.

Equation of a Line

Different Forms of the Equation of Line

General Equation of a Line

Angle Between a Line and a Plane

The Angle Between Two Lines