Verified
Hint: A junction diode produced from light sensitive semiconductor is called a photodiode. It is an electrical equipment that is used to detect and convert light into an energy signal with use of a photo detector.

Complete step by step answer:
A photodiode is basically semiconductor material that converts light into electrical current. The current is produced when photons are getting absorbed in the photodiode. Photodiodes may include optical filters, built-in lenses, and sometimes have large or small surface areas. Photodiodes generally have a slower response time according to its increase in surface area. Photodiodes are made in use at consumer electronics devices such as compact disc players, smoke detectors, medical devices and the receivers for infrared remote control devices which helps to control equipment from televisions to air conditioners. For many other applications also either photodiodes or photoconductors are being used. 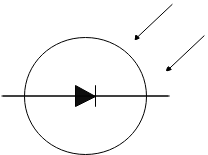 When a photon of certain energy strikes the diode, it generates a couple of an electron-hole. This generated holes in the region move towards the anode and electrons produced move toward the cathode also. Hence a photocurrent will be generated. This is the working principle of a photo diode. The photodiode is reverse biased in the operation in the photoconductive mode. As the photodiode is reverse biased, the width of the depletion layer gets increased. This will decrease the capacitance of the junction and hence the response time also. In short the reverse bias becomes the reason for faster response times for the photodiode.

Note:
In photodiode, dark current is the relatively small electric current that passes through photosensitive instruments like a photomultiplier tube, photodiode, or charge-coupled device even when no photons are entering the instrument.