Explain how a hydrarch succession progresses from hydric to mesic condition and forms a stable climax community.

Verified
Hint: The pioneers in this primary succession are phytoplanktons, then rooted hydrophytes, sedges, grasses, and finally the trees.

Complete answer:
Hydrarch succession starts on shallow water, such as ponds and lakes, and terminates in a mature forest, this will form a stable climax community from hydric to mesic conditions.
There are four stages in hydrarch succession:
- Submerged aquatic species start to appear in the deeper water: In the initial stage, phytoplanktons begin to multiply in the pond water and immediately become the pioneer colonizers.
Then free-floating angiosperms replace the small phytoplankton.
- Emergent cattails and bulrushes get rooted in the mud of shallow water: At this stage rooted and submerged hydrophytes replace the free-floating angiosperms. eg. Hydrilla, Potamogeton, Vallisneria, etc.
- Willow thickets start to grow along the banks of the distant shoreline: After, the species of Cyperaceae and Gramineae such as Carex, Juncus, etc colonize the area. With the help of their branched rhizomatous system, they form mat-like vegetation
- A conifer forest in drier, well-drained soil above the willow thickets: The species of shrubs and a variety of trees becomes dominant and forms the climax community at this final stage. 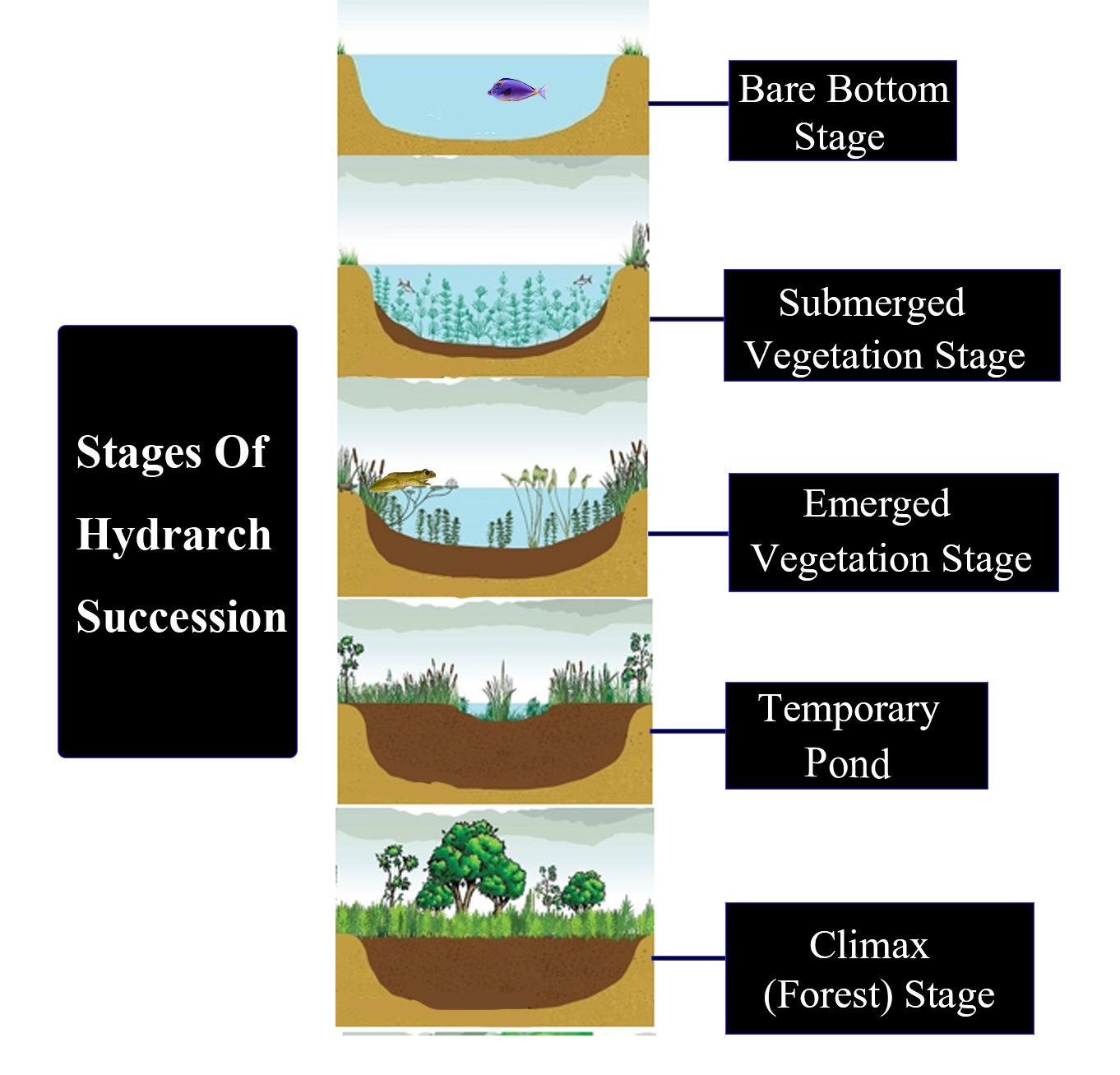 Additional Information:
- The process of the structure of a biological community over time is known as ecological succession. In response to changing temperatures, moisture levels, light availability, rates of inflow and outflow of nutrients, and activities of plants, animals, and other forms of life the ecosystem evolves constantly.
- Without a major disturbance (such as a flood or a wildfire)if the succession is allowed to continue, the structure of the ecosystem will be of mixed types of plants and animals based on the resources (such as moisture and nutrients) the environment can provide.
- When the biological community in a given environment becomes relatively stable, such an assemblage of living things is a climax community.
- Succession is of two types, namely primary and secondary succession.

Note:
- Hardy species that first colonize barren environments are called pioneer species.
- Free-floating angiosperms are aquatic plants that are found suspended on the water surface. They do not have roots attached to any substrate, sediment, or even to the bottom of the water body. -They can be easily taken away by air and provide the breeding ground for mosquitoes. An example is Pistia spp commonly called water lettuce, water cabbage, or Nile cabbage.
- Newly exposed or newly formed rock is colonized by living things for the first time in primary succession.
- Following the disturbance in secondary succession, the area previously occupied by living things is disturbed, disrupted, and then recolonized.