Verified
91.8k+ views
Hint: In many of the invertebrate animals, a tubule that usually opens into the body cavity and the other to the exterior, acts as an organ of excretion because it is used to remove metabolic wastes from an animal’s body. This tube or organ usually has ciliated or flagellated cells and absorptive walls.

Complete answer:
Excretory organs in earthworms are Nephridia. Earthworms that come under the annelids,found to have slightly more evolved excretory structures which are known as nephridia, A pair of nephridia is present on each segment of the earthworm. They're kind of like flame cells in that they have a tubule with cilia. 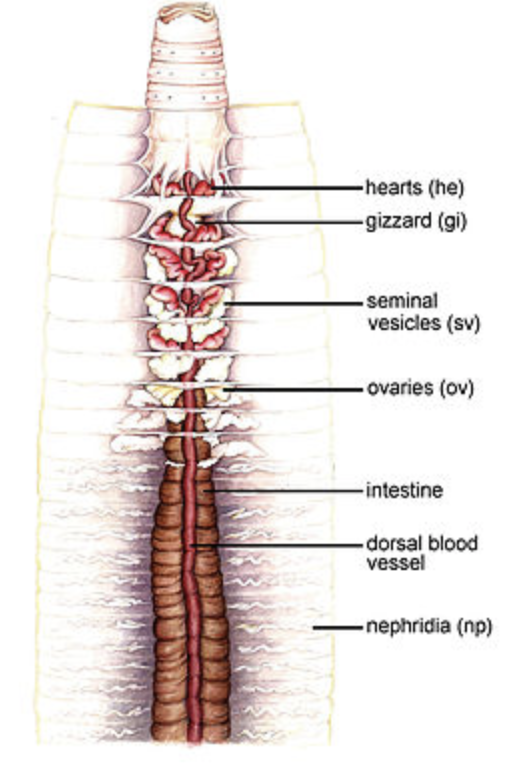 Excretion occurs through a pore called the nephridiopore. They're more evolved than the flame cells therein they need a system for tubular reabsorption by a capillary network before excretion.

Additional Information: The nephridia occur in pairs on each segment on the annelid and are an invertebrate organ present in annelids which function as waste removal from the annelids body. The nephridia usually pump water carrying toxins from many sources like food, ions, and useless hormones out of the organism by directing them down funnel-shaped bodies and then removed out at the nephridiopore. The urine which is produced by filtration of blood is mostly modified into secondary urine through selective reabsorption by the metanephridium lining cells. It's also found in arthropods and Mollusca. In some of the annelids, it was seen that the nephridium tubule doesn't open into the body cavity but ends internally during a cluster of cells referred to as solenocytes or flame cells. The characteristics of some annelids that allies them with other non-segmented phyla that haven't any true body cavity are characterized by the possession of those cells. They belong to phylum Annelida are primarily aquatic and known ones excrete ammonia.
So, the correct answer is ‘(B) Nephridia’.