Draw the diagram of dicot plant and label the following parts:
A. Flower
B. Roots

Verified
118.5k+ views
Hint: Dicots are one of the two types of flowering plants or angiosperms. They are called dicots because they have two embryonic leaves or cotyledons in the seed. The dicots often undergo secondary growth. Also, the floral parts in dicots occur in multiples of 4 or 5. The roots in dicots are often fibrous.

Complete answer: Dicots are plants that have two covers of the embryo. These coverings are called cotyledons or seed leaves. On the other hand, plants having a single cotyledon around the embryo are called monocots. The dicots and monocots both are flowering plants that come under the class of Angiosperms. Angiosperms are plants that produce seeds enclosed in plant tissue. China rose, guava, radish, sunflower, etc. are examples of dicot plants. 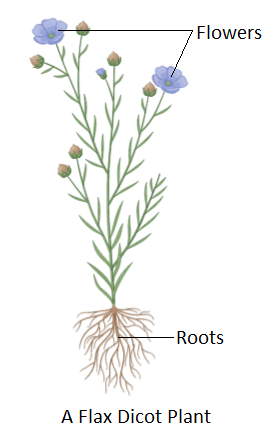 Let us now study different parts of dicots.
-The seeds, foliage, flowers, and roots, etc are some parts that are distinct from monocots in various ways. Their characteristic features can be used as a basis for classification.
-The seeds make a major difference in monocots and dicots. The seeds of dicots have two cotyledons inside the seed. These are two embryonic coverings that are the first to rise above the soil during the germination of seeds. These two cotyledons make the first two leaves of the seedling.
-The leaves of dicots have a characteristic network of branched veins. The whole surface of the leaf is covered in the webbed pattern of veins and they do not run parallel as in monocots. The vascular bundles in dicots that are xylem and phloem usually undergo secondary growth. This results in bark formation.
-The flowers of dicots are usually present in multiples of four or five. The flowers consist of petals, sepals, and pistils, with the reproductive parts of the flower.
-The roots of the dicots are generally branched and fibrous. The main root axis branches off into various smaller parts that form a dense network of the root system. On the other hand, the monocots have a tap root system.