Draw a flower and label it.

Verified
128.7k+ views
Hint: A flower is the reproductive structure found in flowering plants. The biological function of a flower is reproduction. A flower provides an organ which produces egg and sperm and it also provides a platform for the union of sperm with eggs. 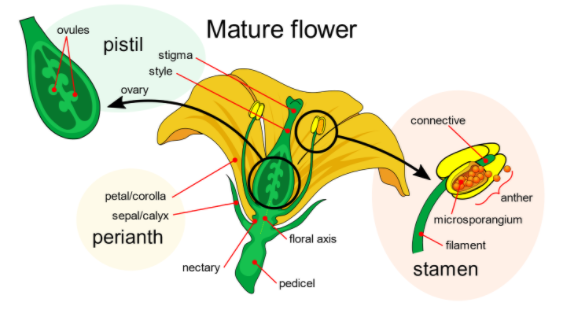 Flower is the reproductive part and it is found in angiospermic plants. As we already mentioned that the primary function of a flower is reproduction. As the flowers are the reproductive organs of plants, they provide mechanisms for the joining of the sperm or pollen to the ovules. Mainly, the flower has four main parts or whorls—known as the calyx, corolla, androecium, and gynoecium.
A sepal is the outermost part of the flower of angiosperms. Sepals are usually green and the main function of sepal is protection for the flower in bud, and it also supports the petals when a flower blooms. The group or collection of sepals are called the calyx.
The second whorl is petal. Petals are modified leaves which surround the reproductive parts of flowers. The group of the petals are called corolla. Corolla is colourful so that they can attract the insects towards the flower, which brings pollination.
Our third whorl is the stamens of a flower and a group of stamens is known as androecium. A stamen is made up of male reproductive units. A stamen has a long stalk called a filament. At the top of the filament is a cluster of microsporangia called the anther.
The third whorl is the female part of a flower, which is made up of one or more carpels and it's group is known as gynoecium. The gynoecium is the innermost whorl of a flower; it consists of pistils. A pistil typically consists of a swollen basal portion, which we called the ovary, an elongated section called a style and an apical structure that receives pollen called a stigma.