Draw a diagram showing the external features of fish and label any two parts.

Complete answer:
To answer this question, we must know about the structure of fish.
-The fish is an aquatic animal whose body is modified to live in water. They have a streamlined body which helps it to swim in water.
-The fish-like vertebrates have a notochord, vertebrae and a well defined body with head and tail. The external parts of fish are-
-Scales- The outer part of the fish body is covered with scales which is a part of the integumentary system. It is a part of mesoderm. It is covered with a protective layer or the slime.
-Jaw -The vertebrae jaw of the fish are not only meant for feeding but also helps in increasing the respiration efficiency.
-Eyes- The eye of a fish is similar to mammals and birds. The eyes have a rod and cone for vision in dim light and also colour vision.
-Gills Located under the operculum. It is the respiratory organ for extracting dissolved oxygen from water.
-Lateral line- It is a sense organ which helps in detecting vibrations and movement of water.
Nostril-
-Fins- It is the most important feature of fish which helps it in swimming. The types of fins are anal fin, caudal fin, dorsal fin. 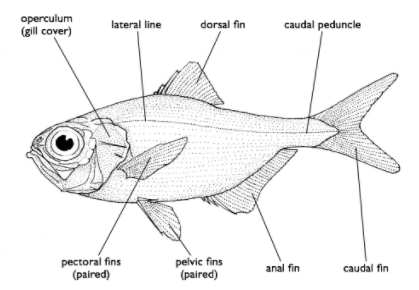