Verified
128.7k+ views
Hint: Astral rays arise from a non-membranous organelle found in animal cells which helps in cell division. It contains two cylindrical structures called ‘centrioles.’ Both the centrioles are arranged perpendicular to each other within the cell and each one has an organisation like a cartwheel.

Complete answer:
Astral rays arise from centrosomes. Let’s look into the cell division in detail to understand better.
- Cell division is considered a very important process in all living organisms.
- The ‘cell cycle’ is the sequence of events by which a cell duplicates its genome, then forms the other constituents of the cell and ultimately divides into two daughter cells.
The cell cycle is divided into two phases:
M phase (Mitosis phase): represents the phase when the actual cell division or mitosis occurs.
Interphase:
- It represents the phase between two consecutive M phases.
- One of the important events that occur in this phase is the duplication of the centrosome.
M Phase:
- The mitotic phase is also called the equational division.
- For convenience, mitosis has been divided into four stages of nuclear division or karyokinesis. They are Prophase, Metaphase, Anaphase, and Telophase.
Let's learn briefly about the events characteristic of prophase.
- The centrosome which had duplicated in the interphase begins to move towards the opposite poles of the cell.
- Long microtubules subsequently radiate out of each centrosome. These radiating tubules are called ‘asters.’
- The two asters at the opposite poles along with the spindle fibers together form mitotic apparatus. 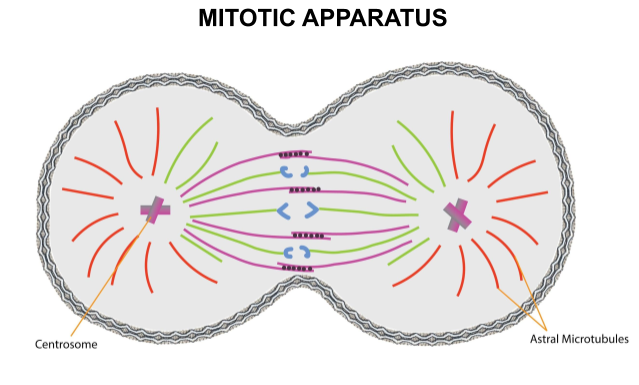 So, the correct answer is ‘Centrosomes.’