Verified
147k+ views
Hint: Anterior choroid plexus is lined with secretory epithelium. It secretes a colourless, clear liquid that circulates through the cavities of the brain transporting oxygen and nutrients to brain cells. It also protects the brain from physical and chemical injury.

Additional Information:
-The human brain is protected by three meninges from outer to inner- dura mater, arachnoid mater and pia mater. Dura mater is a tough membrane with close association to the inside of the skull. Arachnoid mater, just as its name suggests, has a web-like structure. While the innermost membrane i.e pia mater is thin, delicate and also highly vasculated with blood vessels.
-The space between pia mater and arachnoid mater is known as subarachnoid space. It is filled with cerebrospinal or CSF fluid. This fluid is highly important as it reduces the weight of the brain from 1.4 kg to 0.18 kg by adding to its buoyancy of brain
-CSF is produced by the choroid plexus which lines the ventricles of the brain. The ventricles are hollow spaces interconnected with each other and filled with fluid. Thus, forming a ventricular system.
-It consists of two lateral ventricles, third and fourth ventricle.
- CSF formed in choroid plexuses of each lateral ventricle flows into the third ventricle. It then flows to the fourth ventricle via midbrain through cerebral aqueduct. After the addition of more CSF by the fourth ventricle,it enters subarachnoid space. 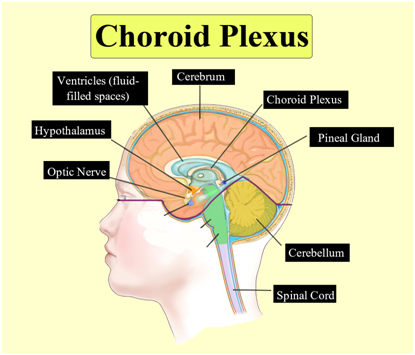 So, the correct answer is ‘Roof of the diencephalon.