Verified
146.1k+ views
Hint: The aleurone layer is the outermost layer of endosperm, followed by the inner starchy endosperm. Since it is an endospermic layer, it is formed as a result of double fertilization.

Complete answer:
In maize seeds, the aleurone layer stores proteins and constitutes a triploid condition, which is represented by 3n. Development of the endosperm initiates following double fertilization, in which one pollen sperm nucleus fertilizes the egg cell to form the zygote and the second nucleus fuses with two polar nuclei (two nuclei, situated central to the embryo sac) in the central cell of the megagametophyte (female gamete) to form the triploid endosperm.
Figure: Diagrams showing aleurone layer in Maize seed and its tripolid (3n) endosperm. 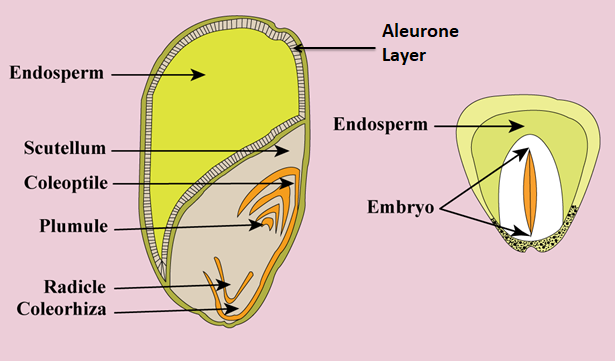 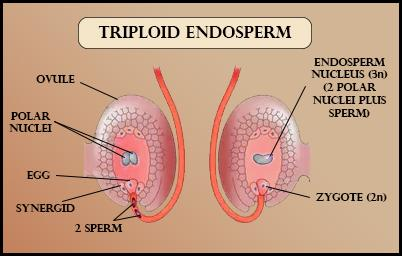 Additional Information: -Two types of grains are present in maize seed, which are aleurone grains and spherosome grains.
-The spherosomes contain lipid molecules, which are present in a lesser amount as compared to the aleurone grains.
-The Aleurone layer can synthesize little starch, oil, and phytin but contains significant quantities of protein as inclusion bodies in small vacuoles.
-The embryo is surrounded by the endosperm and provides nutrition in the form of starch, though it can also contain oils and protein.
-The part of a seed or bud that contains the earliest forms of a plant's roots, stem, and leaves is known as an embryo.