Verified
128.7k+ views
Hint: The plant is a member of the Soapberry family which is an evergreen tree and is a rich source of vitamin C. It is found mainly in the different regions of China.

Complete answer:
Air layering is the cutting of tree bark and the wound is enclosed in a moisture content moss and then packed with a plastic bag. The rooting hormone is applied to the wound which results in the root growth and then the stem of the plant is removed and planted separately to grow. This usually occurs in the case of Litchi.

Additional Information:
-The plant stem when prepared for planting should be kept in normal conditions, too much sun can cause damage to the plant.
-The moisture should be proper to prevent the roots from drying.
-The layers may take a few weeks to develop into a complete root system.
-The air layering is dependent upon the plant species and its metabolism.
-It is a type of vegetative propagation that is practiced to produce a desirable plant.
-In simple layering, the stem is bent down to the ground, and the area which is to be propagated touches the ground which is then buried in the soil, and from this, a new plant is developed.
-The plants developed by this method are exactly the clones of the parent plant. 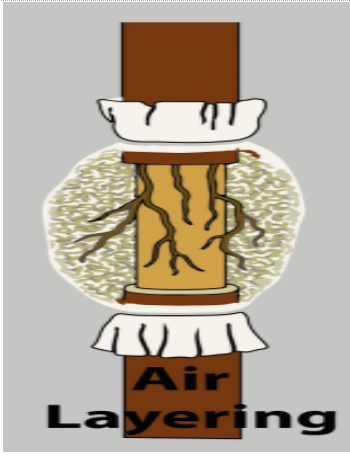 So, the correct answer is ‘Litchi’.