(a) How drugs can be classified according to different criteria? Write the name of each?
(b) How do antihistamines work? Give an example of any histamine.
(c) Write the structural formula of any sleep producing barbiturate.

Verified
Hint: A drug is any substance which on consumption causes a change in an organism’s physiology or psychology. A drug can be consumed via inhalation, injection, smoking, ingestion, absorption, a patch on the skin, or dissolution under the tongue.

Complete answer:
(a)-In pharmacology, a pharmaceutical drug (also called a medication of medicine) is a chemical substance used to treat, cure, prevent or diagnose a disease or to promote the well being of a living organism.
-The classification of drugs can be done in the following ways:
(i)Based on the pharmaceutical effect- These types of drugs are used for the treatment of a particular type of problem. For example, analgesics like KneeRelief, Aleve PM are used as painkillers, antiseptics like Betnovate and Bepanthen are used to treat microbial infections.
(ii) Based on drug action- In this type of classification, the drugs which target a particular biochemical process are placed in the same class. For example, antihistamines like Dimetane and Zyrtec inhibit the action of histamine which causes inflammation in the body.
(iiI) Based on chemical structure- The drugs having a similar structure and similar pharmacological activity are placed under the same class. For example, sulphonamides.
(iv) Based on molecular targets- These drugs interact with a particular group of biomolecules such as carbohydrates, lipids, proteins, nucleic acids. Drugs with some common structural features may have the same mechanism of action on targets.

(b)-A person who is allergic to any particular allergen may experience symptoms such as nasal congestion, sneezing, and itchy skin when exposed to the particular allergen. Antihistamines can help such patients to ease these symptoms.
-Antihistamines work by blocking the effects of a nitrogenous compound called histamine in a body.
-Histamines are generally released when a body detects something infectious. The release of histamines causes blood vessels to expand and the skin to swell which protects the body.
-But people with allergies show hypersensitive reactions to even harmless substances like pollen grains, animal hairs, house dust, etc, and their body in turn starts producing histamine and they develop symptoms like watering eyes, running, or blocked nose, sneezing and skin rashes.
-Antihistamines help such people by stopping the release of the histamines or they can reduce the severity of symptoms.
-For example, Zyrtec and Claritin are two popular antihistamines that can reduce allergy symptoms like sneezing, skin rashes, watering eyes, a running or blocked nose. -Allobarbital, also known as allobarbitone is a branded antihistamine drug whose structure is 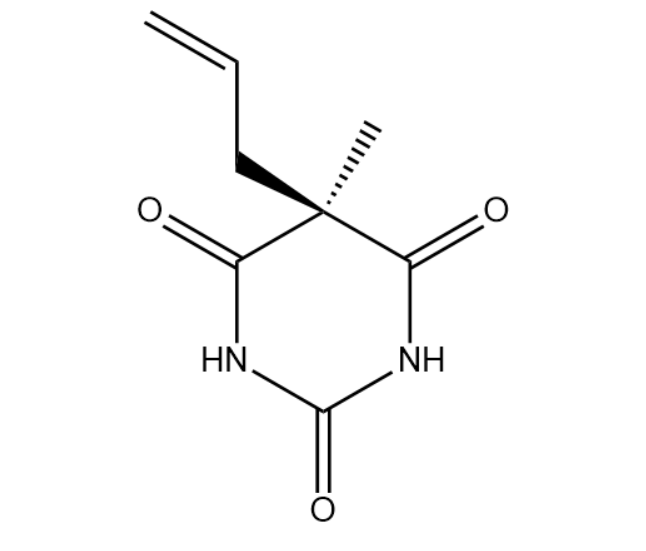 Note: Drugs when subscribed by a doctor for the treatment and cure of disease is good and beneficial for an individual, but when an individual uses drugs illegally, it becomes a threat. An individual can take illegal drugs due to many reasons like they want to feel good when depressed, want to perform better in school, work or play, or they are curious to use it. Soon they become so drug addicted that it becomes impossible to live without drugs. They start showing withdrawal symptoms due to stopping of drug intake.