When a cell reproduces. What happens to its DNA, which is copied and passed into offspring?

Complete answer:
One of the main steps during cell reproduction is DNA replication, where new DNA is synthesized from the copy of parent DNA. This DNA replication is known as semiconservative replication as the DNA formed is composed of one strand (50%) of parental DNA and a newly synthesized (50%) strand. During DNA replication DNA is first unwound by helicase enzyme, opening up the double-stranded DNA like a fork, separating the two strands. These strands then are used as a template strand to synthesis a new DNA strand complementary to the template/parental strand. The synthesis of a new strand occurs on both the parental strands separately in antiparallel directions. The newly synthesized strand and the template strands are joined together to form a new dsDNA (double-stranded DNA). 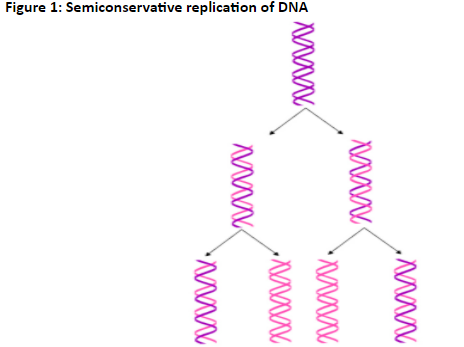 Cell reproduces through a process called the cell cycle. Cell cycle involves 4 stages: Gap 1 ($G_1$) where cell increases in size, duplicates cellular contents and prepare for next phase (S), Synthesis ($S_1$) phase is where DNA replication takes place through semiconservative replication, Gap 2 ($G_2$) phase is the preparation phase for cell division either through meiosis or mitosis and the cell grows in size, and the last stage is Mitosis phase (M) involving equal division of DNA followed by cytokinesis resulting in the formation of two identical daughter cells. These newly formed cells either undergo the cell cycle again or enter a resting state known as Gap 0 ($G_0$) phase. Cells enter the $G_0$ phase after existing from the $G_1$ phase. Cells in the $G_0$ phase perform all its function and undergo terminal differentiation, without actively preparing to divide.