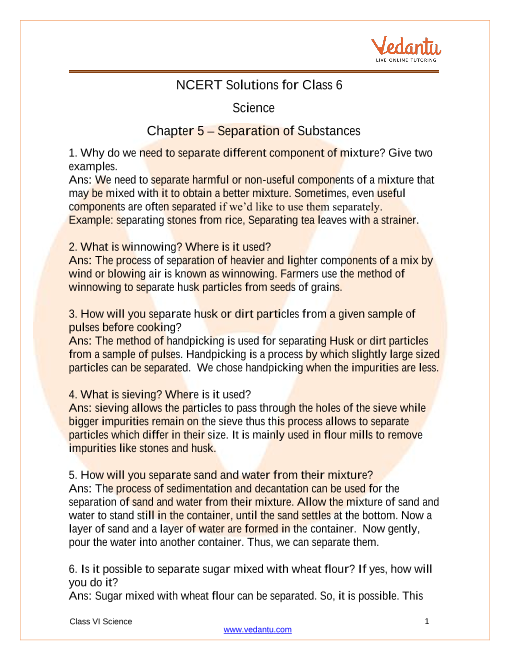 1. Why Do We Need to Separate Different Components of the Mixture? Give Two Examples.

Ans: We need to separate harmful or non-useful components of a mixture that may be mixed with it to obtain a better mixture. Sometimes, even useful components are often separated if we’d like to use them separately.

2. What is Winnowing? Where is it Used?

Ans: The process of separation of heavier and lighter components of a mix by wind or blowing air is known as winnowing. Farmers use the method of winnowing to separate husk particles from seeds of grains.

3. How Will You Separate Husk or Dirt Particles from a Given Sample of Pulses Before Cooking?

Ans: The method of handpicking is used for separating Husk or dirt particles from a sample of pulses. Handpicking is a process by which slightly large-sized particles can be separated.  We chose to handpick when the impurities are less.

4. What Is Sieving? Where Is it Used?

Ans: sieving allows the particles to pass through the holes of the sieve while bigger impurities remain on the sieve thus this process allows to separate particles which differ in their size. It is mainly used in flour mills to remove impurities like stones and husk.

5. How Will You Separate Sand and Water from Their Mixture?

6. Is it Possible to Separate Sugar Mixed With Wheat Flour? If Yes, How Will You Do It?

Ans: Sugar mixed with wheat flour can be separated. So, it is possible. This can be done by the process of sieving as the particles of wheat flour differ in size from sugar.

7. How Would You Obtain Clear Water from a Sample of Muddy Water?

Ans: The process of filtration can be used in order to obtain clear water from the sample of muddy water. For this process, muddy water is allowed to pass through a filter paper. Where the mud is collected on the filter paper and water passes through it.

Ans: The method of separating seeds of paddy from its stalks is called threshing.

Ans: When milk, cooled after boiling, is poured on to a piece of cloth the cream is left behind on it. This process of separating cream from milk is an example of filtration.

Ans: Salt is obtained from seawater by process of evaporation.

Ans: Impurities that are settled at the bottom when muddy water is kept overnight in a bucket. The clear water was then poured off from the top. The process of separation used in this example is called sedimentation and decantation.

10. Lemonade is Prepared by Mixing Lemon Juice and Sugar in Water. You Wish to Add Ice to Cool It. Should You Add Ice to the Lemonade Before or After Dissolving Sugar? in Which Case Would it Be Possible to Dissolve More Sugar?

The different separation methods of substances Class 6 chapter are simplified in NCERT solution for Class 6 Science Chapter 5. Some of the methods include hand-picking, winnowing, threshing, sieving, evaporation, sedimentation, filtration, etc. Let us discuss each of these methods in detail.

Hand-picking is the crudest method of Separation of Substances. This method can be used to separate large substances. For example, large rocks can be hand-picked from garden soil. Also, plastic is removed from other debris by hand-picking. The details of this method of separation are discussed in Class 6 Science Chapter 5.

Threshing is another method of separating substances. It is mainly used to separate the grains from the stalks. However, this process cannot be applied to all grains. This technique is mainly used to separate rice or wheat. In this process, the stalks with the grains are thrashed on a stone or a wooden slab. Continuous slabbing will separate the grains from the stalk. The details of the threshing process are well explained in Class 6th Science Chapter 5.

Winnowing is another process of Separation of Substances. Class 6 Science Chapter 5 explains the process. This process is used to separate the heavier from the lighter substances. This technique is often used by villagers to separate seeds from seed covers. They take the seeds in a plate and hold it at shoulder height. Then they tilt the plate slightly and continuously move it. The lightweight seed covers separately easily and falls from the plate. The heavyweight seeds remain on the plate. A detailed description of the winnowing process is detailed in NCERT Solutions for Class 6 Science Chapter 5 Separation of Substances.

Sedimentation is mainly done to separate solids that are suspended in a liquid. The substance must not dissolve in the liquid. The container containing the mixture must not be disturbed during the sedimentation process. When the liquid (along with any soluble impurities) is removed from the insoluble solute, the process is called decantation. This technique is often used to wash rice. The rice, being insoluble sediments at the bottom of the container. The water, along with the dissolved impurities, is removed by decantation. Class 6th Chapter 5 Science clearly explains the process of sedimentation.

Filtration follows the same principle as sieving. However, you might not require the continuous agitation process during filtration. Filtration is the process of separating finer particles from a liquid by using the gravitational force. The liquid containing the finer particles is passed through a filter paper with the gravitational force. The liquid gets collected in a beaker kept below the funnel containing the filter paper. The particles get collected on the filter paper. You will get solved examples of filtration in NCERT solutions for Class 6th Science Chapter 5.

There can be multiple ways to separate two substances in a mixture. For example, sand and salt can be separated by winnowing or sieving. The mixture can also be blended with water. Salt, being soluble, separates from the sand, which is insoluble in water. As a result, the sand can then be separated. The salt can then be separated from water by the process of evaporation. You will find more examples in NCERT Class 6 Science Chapter 5.

Water is often considered as a universal solvent. It can dissolve several substances. However, there is no unlimited solubility for any substances in water. There is a restriction to the amount of any substance that can be dissolved, beyond which the solution is called saturated.

Q1. How can you Separate Salt From Water?

A: Salt is soluble in water. The best way to separate salt from water is by evaporation. In this process, the salt-water mixture is heated continuously until the evaporation point of the water. After the water evaporates, the salt is left behind in the container. You can collect the evaporated water by taking it in a condensing container. You can learn about it in Class 6 ch 5 Science.

Q2. What is the Filtration?

A: Filtration is a commonly used process in several laboratories. It is used to separate fine particles insoluble in any solvent. It works in the direction of gravity. The blend is allowed to pass through a filter paper. The particles get trapped on the filter paper while the liquid gets collected beneath. You can learn about it in Class 6 Science Chapter 5.