About Stars for Kids

What is a Star?

Giant spheres of superheated gas, primarily hydrogen and helium, make up stars. Some chemical reactions cause these gases, hydrogen to convert or change into helium, which is how stars become very hot. It is because of this that stars appear bright and dazzling. Do you know that the Sun is also a star? To learn more about these twinkling lights or stars in the sky, continue reading through the following.

Lifecycle of a Star

Birth – Nebulae, or huge clouds of dust, are the birthplace of stars. The dust is pushed together by gravity. As more material clumps together, gravity becomes stronger, and the star begins to heat up and become a protostar. Nuclear fusion, a type of chemical reaction, will begin once the centre is hot enough, and a young star will be born. A Cluster of Stars – Pleiades

These types of stars will continue to burn energy and glow for billions of years after they cease to be a star. The "main sequence" describes the state of the star over the majority of its life. During this time, a balance is struck between gravity's desire to reduce the star and heat's desire to expand it. This is how the star will stay until it runs out of hydrogen.

When the hydrogen in the star runs out, the star expands and turns into a red giant.

The star's core will eventually begin to produce iron. This will result in the star collapsing. What happens next to the star is determined by its mass (how big it was). The ordinary star will fade into obscurity and become a white dwarf. Larger stars will produce a supernova, which is a massive nuclear explosion. It could become a black hole or a neutron star after the supernova.

Stars form from the massive clouds of dust, known as nebulae. It is represented below. 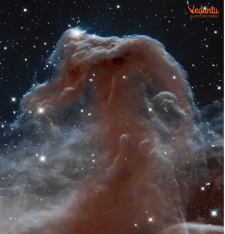 Stars appear in a variety of shapes and sizes. The colour of stars in their main sequence (normal stars) is used to classify them. The smallest stars are red and emit very little light. Like the Sun, medium-sized stars are yellow. The brightest stars are blue and extremely massive. The hotter and brighter a main sequence star is, the larger it is.

The collapse of a giant star produces a neutron star. It's small, but it's dense.

We hope you have learnt something new about the stars and the Sun in the sky today through this article. The world we live in is full of such mysterious and exciting things and occurings and there is no end to learning about them. If you found this article insightful and wish to read more of such similar topics, head over to our website and discover from the plethora of articles on interesting topics for kids.

FAQs on About Stars for Kids

1. What makes the stars shine?

Almost all stars are mostly made up of a gas called hydrogen. The core of a star is extremely hot. Due to the high pressure inside the core, some of the hydrogen transforms into helium. This process generates a tremendous amount of energy and allows the star to shine.

2. Give the physical features of stars.

The size, temperature, brightness, and colour of stars vary. The temperature of a star as well as its chemistry cause it to shine in a specific colour. The bluer the stars, the hotter they are, whereas the redder the stars, the cooler they are. The Sun is in the middle of it all. It emits a yellow glow. In terms of brightness and size, the Sun is a very typical star.